By Anne Geggis and Marisa Gottesman 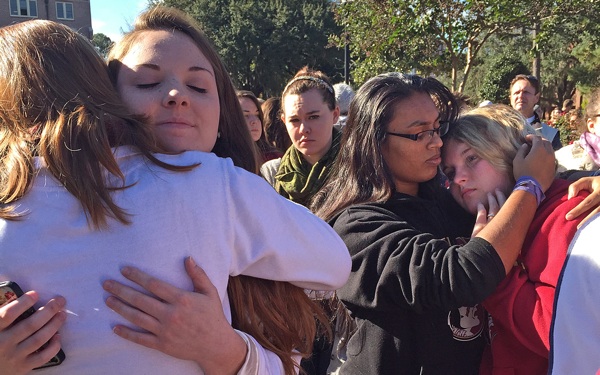 FORT LAUDERDALE, Fla.—Kevin Kaminski’s head had just hit the pillow early Thursday morning when he was jolted awake by his cellphone lighting up with a call from his daughter.

Before he even answered the call just before 1 a.m., he said he was fearing the worst — and his worst fears were soon realized when his daughter, Jackie, 18, of Lake Worth, told him that she was on the second floor of the Florida State University’s Strozier Library, a floor above a gunman on the loose.

“The first word she spoke, I could tell that something was really wrong,” said her father, an editor at Boca Magazine. “She said, ‘Dad, I’m in the library on campus. We’re hiding. There’s a gunman on the floor below us.”

Jackie Kaminski, an FSU freshman, was among an estimated 300 to 400 students in the library where a man shot three students Thursday. Kaminski, a bystander who was unhurt, said she never imagined the feeling of danger that consumed her for a few heart-stopping moments.

“That was the scariest situation I’ve ever been in my life,” she said. “I thought someone would rob me before I would think there was a guy with a gun on the floor below me.”

Kaminski’s father said he just about dropped the phone when she told him why she was calling. “It’s the most shocking news you could possibly hear,” he said.

Jackie Kaminski, a 2014 graduate of Suncoast High School, said she had been working on a chemistry lab report with friends and just returned to the library from getting Dunkin’ Donuts coffee when things went haywire.

“I hadn’t been back five minutes when I hear the shots go off,” she said. “At first I didn’t realize what it was. But then everyone was freaking out. People were coming up from the first floor trying to get away from it.”

She was part of a stampede of 80 people toward the back of the library, behind the bookshelves. She first called 911, where she was told to stay put and that help was on the way. And then she called her dad.

Afraid that being on the phone would attract the gunman’s notice, Kevin Kaminski said he told his daughter to get off the phone. And they communicated by text after that.

The danger was over within 15 minutes, heralded by an announcement from the library’s intercom. She called her dad back. A rush of relief flooded over him at the sound of his daughter’s voice 450 miles away, telling him the gunman was stopped.

But there was no going to sleep for either of them. Concerned about those who had been hurt, he went on social media sites such as Twitter and Facebook to see what information was coming out. Meanwhile, Jackie Kaminski was stuck at the library until 4:30 a.m. as police went floor by floor, making sure everything was clear, she said.

FSU student Tiffany Knight, 19, of Palm Beach Gardens, an FSU sophomore who is an aspiring communications major, was working on a paper on the third floor of the Strozier library when she heard two noises that sounded like very faint shots that reminded her of fireworks, she said.

Students working on papers and projects looked up and began questioning if what they heard were gunshots, she said.

“The whole room chuckled and exchanged words like that wouldn’t happen to us,” Knight said. “We would hear screaming or an alarm.”

Seconds later, the sound of an alarm did go off, confirming the students’ fear that they really did hear gunshots, not celebratory fireworks, she said.

“My stomach dropped,” she said. “We all just gave a blank stare to each other.”

She said a woman announced there was a man with a gun in the building. Before the announcer could finish telling the students to stay put, the group began rushing to the back of the building toward a fire exit, Knight said.

Knight followed two men down the stairs, she said. “I heard screams and people yelling at me to go,” she said.

She came out on the side of the building, where she saw police.

“I was shaken up,” she said. “But I thought we would be OK because cops were there.”

She said she called her mom to say she fine when she heard “rapid gunfire” behind her.

“I didn’t even look behind me to see who was shooting,” she said. “I just ran the opposite way.”

She said it was difficult to be on campus Thursday. “I am thankful I wasn’t on the first floor to see anything,” she said. “I feel like I would be more traumatized.”