Mean Tweets: No, Gerard Butler Does Not Star in 'Sh*t Movies' to Pay Off Student Loans 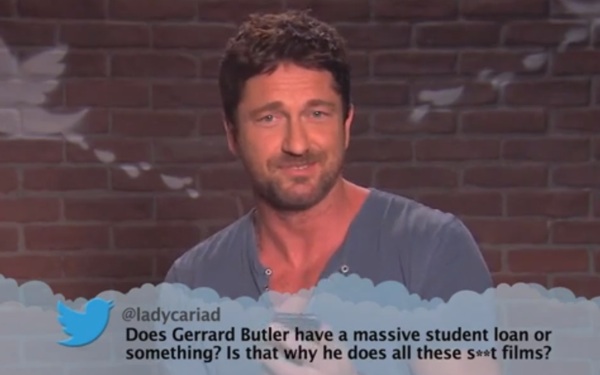 In "Jimmy Kimmel Live's" latest installment of "Celebrities Read Mean Tweets," actor Gerard Butler responded to a tweet that took a stab at his so-called crappy movies. We're guessing the Twitter troll who sent the tweet was referring to only The Bounty Hunter or The Ugly Truth, because 300, P.S. I Love You and a slew of his other films were top-notch.

Anyways, the Twitter user suggested that perhaps Butler is like the millions of college graduates in the country who have to take on sh*tty jobs to pay back the thousands of dollars they took out in student loans. But, the actor claims that is not the case.

"I don't have a student loan. I just do all these sh*t films," Butler explained simply and honestly. Apparently, the actor was able to pay for law school without being left in kabillion dollars worth of debt (lucky him!).

Also appearing on the most recent "Mean Tweets" segment: Britney Spears, Lena Dunham, Adam Sandler, Gwyneth Paltrow and more! Check it out above.