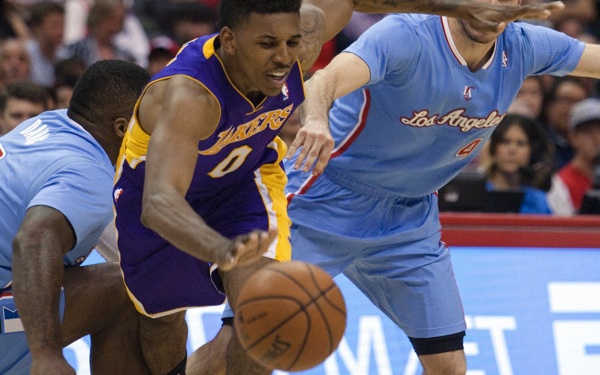 DALLAS — Amid all the trash talk that has shared in recent days since his return, it turns out the highest compliment did not come from himself.

It came from a man who rarely gives out compliments and is demanding of his teammates. You may have heard of him. His name is Kobe Bryant, who did not hesitate when asked if Young is the primary reason why the Lakers (3-9) enter tonight’s game against the Dallas Mavericks (9-3) at American Airlines Center with a two-game winning streak.

Young had sat out the previous six weeks after spraining his right thumb while trying to force a steal out of Bryant’s hands during a preseason scrimmage. But in Young’s first two games, he has averaged 16.5 points on 48 percent shooting. That mark trails only Bryant’s league-leading 27.5 points, albeit on a 38.6 percent shooting clip.

Bryant has already seen enough that he already envisioned Young pursuing a significant accomplishment this season. “Have him be sixth man of the year,” Bryant said of Young.

Last season, Young often talked about winning that award. He even jokingly suggested he would win defensive player of the year after spending his six-year NBA career cementing a reputation as an inattentive defender.

Bryant likes Young’s chances this season for reasons beyond the fact that Crawford has since moved into the Clippers’ starting lineup. Bryant gushed how Young has morphed from an isolation scorer toward a catch-and-shoot player who does not require much dribbling to create his shot.

“You got a player who can get buckets and create. He does wonders,” Bryant said. Nick is a phenomenal talent. He has a pull-up jump shot and is creating mismatches. I’m very happy to have him back.”

The Lakers find Young’s personality endearing. But there was one act the NBA hardly thought was amusing.

The league issued Young a flop warning on Thursday in regards to a play during the Lakers’ 114-109 victory Tuesday over the Atlanta Hawks.

In that game, Young drew a foul on Atlanta’s Kyle Korver while shooting a corner 3-point shot. NBA.com showed a video of the replay, which shows that Korver did not make any contact with Young. But that didn’t stop Young from sliding out of bounds after shooting the ball.

Young won’t actually receive any punishment. But after the NBA issues a warning, the league fines a player $5,000 for a second flopping violation. The monetary penalties increase with each additional flop, including a suspension.