They're Back: Familiar (and New!) Faces of Horrible Bosses 2 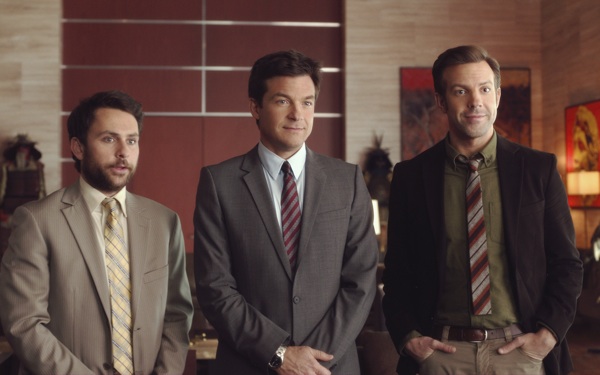 About three years ago, Nick, Dale and Kurt were just three hapless heroes who were unhappy with their jobs. To escape their horrible bosses, they came up with a complicated plan: to kill them. However, it turns out that not everyone is cut for homicide, as the three men eventually realized. Thankfully, they decided to instead embark on different career paths.

This leads us to Horrible Bosses 2, the sequel to the 2011 box office hit that grossed about $118 million domestically. In the latest installment, we’re reunited with Nick (Jason Bateman), Dale (Charlie Day) and Kurt (Jason Sudeikis) as they attempt to create a one-of-kind, albeit absurd, product: the “Shower Buddy,” an in-shower device that dispenses soap, shampoo and water. They find a slick businessman (Christoph Waltz) to invest in the product, but he ends up stealing the guys’ idea and leaving them basically penniless. Naturally they’re upset, so the three come up with a terribly thought-out scheme to kidnap the investor’s obnoxious son (Chris Pine) to secure ransom money and stay in business. From then on, hilarious antics ensue as the three prove their kidnapping skills suck almost as much as their homicide skills when Pine’s character takes the upper hand.

“We loved the idea of them concocting and then calling off a kidnapping plot, only to have the victim force them to go through with it,” explained director and co-writer Sean Anders (We’re the Millers, Dumb and Dumber To).

Sequels are definitely the trend this year (case in point: 22 Jump Street, Dumb and Dumber To, The Expendables 3…need we go on?), but this movie isn’t your typical Part 2.

“What’s tough about a lot of sequels,” explained Anders, “is that the first story takes the characters through some kind of transformation, where they begin as one kind of person and then change into a better, more enlightened person at the end. But Horrible Bosses wasn’t meant to be super heartwarming: it wasn’t that kind of party.”

He added, “In fact, I think it’s safe to say that, at the end of the second movie, they still haven’t learned anything.”

The film isn’t due out until the Thanksgiving holiday (Wednesday, Nov. 26), but it is already garnering solid reviews. The Hollywood Reporter notes, “Although not everyone will be giving thanks as this sequel lands on the upcoming holiday weekend, some will certainly seize on the film’s familiar casting and relatable situations as reason enough to celebrate.”

Yes, Horrible Bosses 2’s hilarious characters are familiar to us, and with that familiarity comes a chemistry that radiates off screen: Bateman, Day and Sudeikis have the same undeniable energy we saw in the first film. “We can still surprise each other,” said Sudeikis. “Charlie, Jason and I become sort of a self-governing unit with a lot of check and balances.”

Anders said the three “were on fire…Sometimes my job was to watch the fireworks go off and hone in on the best stuff, because there was so much of it.”

In this trio, each character has their own role within the group. For example, Nick is the assumingly smart one with the voice of reason. “My job as Nick is to be as close as possible to a representative for the audience, and to react to the absurdity in these scenarios in enough of a realistic way so they don’t think it’s too goofy,” explained Bateman.

Dale, on the other hand, is the stressed-out scary-cat who doesn’t want to do anything that will upset his wife. “[He] is all over the place, flipping out one moment and being ominously quiet the next,” said Anders. “He’s the most neurotic and easily frightened of the three…”

Finally, there’s Kurt, the confident and optimistic one who believes everything will work out. He’s “happy-go-lucky, almost like a puppy dog. He likes to have fun, and he’s willing to go for it,” said Sudeikis. “He’s willing to try just about anything.”

Also returning in the sequel is “Friends” star Jennifer Aniston, who reprises her role as Dale’s sex-addicted ex-supervisor Dr. Julia Harris, a dentist. Only now, Julia is in a sex-addiction group, trying to better herself…or is she?

“She’s so unapologetic and confident and just insanely wrong in so many ways that it’s just so much fun to play,” Aniston told MTV News about her character. “She’s trying to help, supposedly, but it almost feels like she’s swimming in a sea of chum, trying to find her next group of victims.”

In case you didn’t see the first film, Aniston showed off her wild side, and she delivers that same raunchiness in Horrible Bosses 2. “She was really up for anything, and so funny,” said Anders. “She came up with a lot of outrageous language that we worked into the dialogue. She really has a lot of fun with that character.”

Aniston said that in her scenes with Bateman, her longtime friend, “we were trying to out-squirm each other, which was really fun. And Charlie is another one we like to squirm. Charlie is adorable. He’s game for anything, but he blushes easily.”

But perhaps who delivered a slightly bigger surprise with his performance is Pine. We’re used to seeing the actor in more serious roles such as the smartass James T. Kirk in Star Trek and the badass Jack Ryan in Jack Ryan: Shadow Recruit. Comedy is new to him.

“My prescription was to stay loose, hang with the guys and follow the music of the scene,” said Pine. However, was he successful in keeping up with Bateman, Day and Sudeikis, three guys who are no strangers to comedy?

“Let’s face it: Most, for lack of a better word, ‘pretty-boy’ actors don’t have the chops that a lot of comedy guys have,” said Anders in an interview with the Los Angeles Times. “But every now and then a guy like Alec Baldwin or Jon Hamm comes along. I knew Chris was one of those guys.”

And it seems that some critics agree: “Pine … introduces such manic humor that he manages to steal more than a few scenes,” writes Justin Lowe of the Hollywood Reporter.

Unlike Pine, Jamie Foxx is a comedy vet with years and years of experience under his belt. He returns to the Horrible Bosses franchise as the scalp-tatted ex-con consultant (in the first movie, he advised the guys with their murder scheme). Now, the effortlessly funny Foxx is more of a “motivator.”

“He’s trying to let them know that they don’t necessarily need his advice anymore, they just need to stop messing around,” explained Foxx. “They need to own and embrace the criminals that they are and get on with it.”

With that said, will Kurt, Nate and Dale indeed “get on with it?” Will they finally pull off a crime, become their own bosses and rake in millions of dollars from Shower Buddy sales? Well, after you’ve finished eating your turkey, you’ll just have to check it out in theaters to find out.

*All direct quotes were taken from the Horrible Bosses 2 Warner Bros. press kit unless otherwise noted.

Horrible Bosses 2 releases in theaters on Wednesday, Nov. 26, 2014. Win a pair of tickets to see the film at an advanced screening in Los Angeles or Orange County!