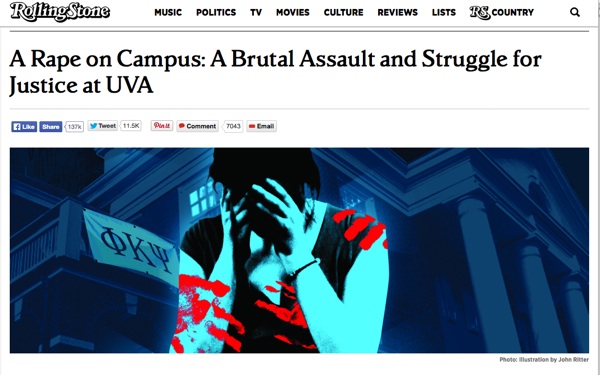 The University of Virginia suspended all fraternity activities and asked police to investigate a 2012 sexual assault in the wake of a damning Rolling Stone article that suggested the Charlottesville campus failed to protect students from potential sexual predators lurking among the school’s Greek organizations.

In a statement issued Saturday, University President Teresa Sullivan said all fraternity activities would be suspended through Jan. 9, 2015, as campus officials discuss steps to prevent assaults on campus.

“The wrongs described in Rolling Stone are appalling and have caused all of us to reexamine our responsibility to this community. Rape is an abhorrent crime that has no place in the world, let alone on the campuses and grounds of our nation’s colleges and universities,” Sullivan said. “We know, and have felt very powerfully this week, that we are better than we have been described, and that we have a responsibility to live our tradition of honor every day, and as importantly every night.”

Sullivan has also asked Charlottesville police to open an investigation of the brutal gang rape described at the beginning of the Rolling Stone piece. According to the report, a girl identified only as Jackie was attacked by several members of the Phi Kappa Psi fraternity in 2012, sexually assaulted for hours and sodomized with a beer bottle at the fraternity house.

The victim had repeated meetings with campus officials and told them that two other women also had accused Phi Kappa Psi members of assaulting them, but the campus did not take any measures to warn students of the potential danger, according to the report.

Response to the article has sparked anger and protests on campus, and four people were arrested Saturday during a rally outside the Phi Kappa Psi house, according to Lt. Stephen Upman, a spokesman for the Charlottesville Police Department.

Although he described the demonstration as largely peaceful, Upman said two men and two women advanced onto the fraternity’s property and refused to leave. They were arrested and charged with trespassing, Upman said.

Sullivan called on students who had knowledge of the 2012 assault to contact Charlottesville police immediately.

“We are united in our compassion, resolve, and determination: Compassion for survivors of assault; resolve to make our community better; determination to begin to solve this problem here and now,” she said.

Upman confirmed that the police department had been contacted by the school about the 2012 case, but declined to comment on any details of the investigation.

The University of Virginia was one of dozens of colleges throughout the country placed under a Title IX investigation by the U.S. Department of Education this year. Investigators are trying to determine whether those campuses violated federal law by failing to properly receive and review complaints of sexual violence and harassment made by students.

Schools that fail to comply could lose federal funding, though none have in the six months since the investigations began.

The move makes the school the second in the region to shut down fraternity activities in the last eight days.

On Nov. 14, West Virginia University suspended all Greek activities on its Morgantown campus after a freshman student from New York was found without a pulse in the Kappa Sigma fraternity house. The student, Nolan Michael Burch, died days later.