Thousands of UC Students Walk Out to Protest Tuition Hikes 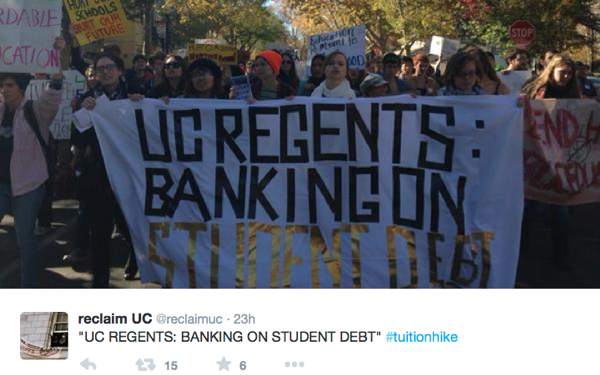 Thousands of University of California students across the state walked out of their classrooms Monday to protest steep tuition hikes they say will cripple their access to education.

Students staged walkouts at most of the 10 UC campuses, building upon a sit-in at UC Berkeley’s Wheeler Hall that began last week.

In Berkeley, sign-toting and chanting students marched across Sproul Plaza, down Bancroft Way to Berkeley High, a few blocks east to Berkeley City College and finally back to campus to the chancellor’s office, where they gave impassioned speeches about the financial hardships they face.

“I’m working two jobs, going to school full-time and still can’t make it,” said Emani Harris, a junior biology major who said she expects to graduate with $10,000 in debt. “I’m struggling now. With these hikes, I don’t know how I’ll get by.”

Students said they feared that college was increasingly becoming an option only for the wealthy and that the University of California was morphing into a private school. Some decried how far the university had strayed from the 1960 California Master Plan for Higher Education, which was intended to provide affordable college educations to every motivated student in California, regardless of income.

Sydney Barnett’s story was typical of the students who turned out for Monday’s protest. She comes from a low-income family, is among the first in her family to attend college and works two jobs to make ends meet. One job is full-time at a cafe in Oakland, and the other is 10 to 20 hours a week at a media center on campus. Before she came to UC Berkeley, she attended a community college, then worked for several years to save money for Cal.

“I walked out of class today to defend public education,” said Barnett, a film major who lives in West Oakland. “I’m barely making it. I have five younger brothers and sisters — I have no idea what they’re going to do. It seems like college is becoming something for the elite.”

Mar Velez, who’s studying for master’s degrees in planning and public health, expects to graduate this spring with $30,000 in debt. Her family emigrated from Mexico in the 1980s and worked in California’s farm fields, and she is the first to attend college. Her father works at a car wash and her mother works at a day care center.

“Not only do I have debt, my family has debt. It’s debt upon debt upon debt,” she said. “It’s a cycle of poverty. Going to college was supposed to help us escape that, but with these continual tuition hikes it’s just getting worse.”

Her friend, Carlos Macias, who’s studying for his Ph.D. in Spanish and Portuguese, said conditions are even tougher for undocumented students, who have a harder time obtaining loans and finding work. He was undocumented when he started his undergraduate education at UC Berkeley in 2003, and frequently had to drop out for lack of money.

To get by, he worked double shifts as a waiter at Mexican restaurants in Union City and Foster City.

Alex Tarr, a graduate student in the geography department, said he struggles financially, but the undergraduates he teaches have it worse. Not only do they live with constant money pressures, but the long working hours and sometimes long commutes distract from their learning, he said.

One of his students works as a bartender in Livermore and is perpetually exhausted from the late nights, he said. Another gets up at 4 a.m. to work an eight-hour shift at Trader Joe’s before facing a full load of classes every day.

“These tuition hikes feel like a betrayal,” he said. “They have this audacity to say they need more money from students, at the same time they won’t tell us exactly what they need the money for.”

Police followed the protesters for much of the hour-long march, but generally kept their distance.

Some supportive alumni joined the protest, as well. Nick Johnson graduated last year with degrees in history and anthropology from UC San Diego with $18,000 in debt, after toiling for most of his undergraduate years as a clerk at a campus food store that stayed open until 1 a.m. He’s now working as a handyman in Oakland and applying to UC for graduate programs.

“I know what it’s like to work long hours and go to school at the same time,” he said. “I’m out here today because I believe that if we protest, we can make things better in the future. … It’s worked before.”

Protesters planned to return to class Monday afternoon, but the sit-in at Wheeler will continue. Demonstrations like Monday’s will continue, as well, they said.