The Hobbit: Battle of the Five Armies More of a Head Trip Than a War 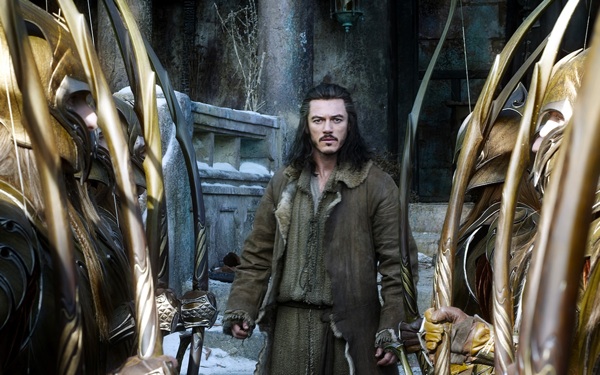 This final installment in The Hobbit franchise is considered 'The Defining Chapter.'
(Credit: Warner Bros.)

Judging strictly from the title, it might seem safe to assume that The Hobbit: The Battle of the Five Armies, the concluding installment in Peter Jackson’s latest trilogy of films based on the writing of J.R.R. Tolkien, would arrive as something of a war film, Middle-earth style.

But Jackson insists that the blockbuster fantasy, which opens in theaters Dec. 17, is far more interested in charting the descent of proud dwarf Thorin Oakenshield (Richard Armitage) into a crippling madness than it is in conjuring images of battlefield brutality.

“It’s very much like a thriller. That’s the tone of it,” Jackson said, speaking by phone from New Zealand, where he was in the final throes of completing the film. “I’m not letting that tone go for a second. It gives me a chance to feel like I’m making a different movie, not something that has the familiar elements that we’ve had in the past.”

The knotty pathways of Middle-earth have become a second home to Jackson, 53, who has spent more than a decade bringing the faraway land to life on the screen with his Lord of the Rings films and the Hobbit movies, earning critical acclaim and an outsized cinematic reputation along the way.

The final Hobbit installment, The Battle of the Five Armies, represents the culmination of a life’s work in a certain way.

Centering on the concluding portion of Tolkien’s landmark 1937 youth novel, the story picks up where last year’s The Hobbit: The Desolation of Smaug ends, with dwarf king Thorin (Armitage) and company, accompanied by Martin Freeman’s good-natured hobbit, Bilbo Baggins, having reclaimed the treasure of their lost homeland Erebor from the evil dragon (Benedict Cumberbatch).

A vengeful Smaug heads to Lake-town to decimate the nearby village of Men, and the destruction the dragon causes leaves the townspeople insisting upon recompense from the dwarfs who disturbed his resting place, setting into motion the conflict that will grow to include the armies of the title.

Completing the third Hobbit movie, Jackson said he is in sprightly stride. He’s spent much of the year focused on editing the movie and completing the visual effects — the last stretch of actual filming having taken place over the course of about five weeks last year.

“I found my rhythm in a way,” he said. “I understood where we were going with these characters. We weren’t discovering it along the way. We started out doing a little bit of that in the beginning. We now knew who everyone was and what they represented and could really kind of crank it up. The making of it felt very different to me than the other ones.”

As they did with Smaug, Jackson and his writing partners Fran Walsh and Philippa Boyens again took liberties with the original story — in this case, giving the human character Bard the Bowman, played by Luke Evans, a more substantial role in the story (for Smaug, they invented a new character, the warrior elf Tauriel, played by Evangeline Lilly).

“Bard is a blank page in terms of what he could be in a movie like this because Tolkien doesn’t really describe him too much in depth in the book of The Hobbit,” Jackson said. “We wanted to give Bard a deeper role than that.... He’s the counterpoint to Thorin, really.

“On one side of it you’ve got this dwarf descending into madness and on the other hand this human being who has to hold his people together and confront Thorin. He is the guy who has to try to manage what’s happening and carry all the humanity that Thorin has lost.”

Despite staging a monumental war among hostile tribes of creatures and guiding the story lines of dozens of characters to their conclusion, Jackson said he’s made an effort to keep the film from feeling ponderous or overly long — some nine weeks away from finishing his cut of Five Armies, the director said he expected it to be the shortest of his six Tolkien movies.

“It’s very snappy, it’s got very short scenes, it whizzes along,” said Jackson, who already has begun writing scripts with Walsh for projects that have nothing to do with hobbits, orcs or goblins. “The other five Tolkien movies have all had journeys...This movie, there ain’t no traveling. Everybody’s exactly where they need to be.

“They’re fulfilling a plan that’s been in effect for two other movies now,” he added. “Everything was designed to pay off in this third movie. It will be interesting to see how people respond to it.”

The Hobbit: The Battle of the Five Armies releases in theaters on Wednesday, Dec. 17, but see the film on THURSDAY, DEC. 11 in Los Angeles, Downtown Los Angeles or Orange County!

Enter to win a prize pack from the film by clicking here!