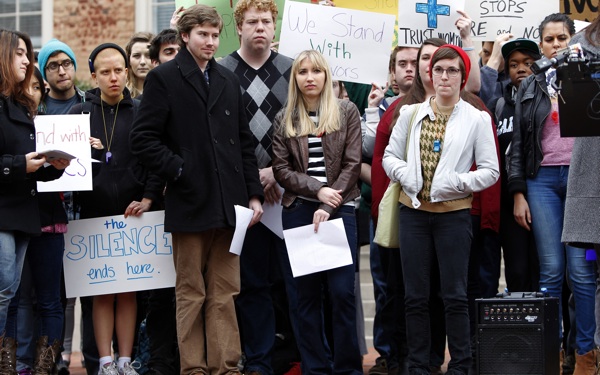 WASHINGTON — The University of Virginia is now at the center of the growing debate over campus sexual assault.

A searing account in Rolling Stone of the gang rape of a freshman at a fraternity party in 2012 has triggered a firestorm of criticism at officials at the prestigious Charlottesville school founded by Thomas Jefferson.

University President Teresa Sullivan might have been speaking for many of her peers when she said, “This will require institutional change, cultural change and legislative change, and it will not be easy.”

In the debate over campus sexual assault, the roles are pretty well defined and the loudest voices belong to women. The numbers tell the story: Nearly 1 in 5 women have been raped in their lifetimes, according to a January White House report; among men, nearly 1 in 71.

“Most victims know their assailants,” according to the report, and 98 percent of perpetrators are men.

Some colleges and universities are working to change the culture that Sullivan refers to, by finding new ways to engage all students — men, in particular — in an attempt to end sexual assault.

At the University of North Carolina, Chapel Hill, programs such as the school’s “One Act” bystander intervention and “Men’s Project” are identifying and working with different groups on campus.

“The Men’s Project is a group that actively explores issues related to masculinity, privilege, and how that all plays into creating a community that is violence-free,” said Christi Hurt, assistant vice chancellor and chief of staff in the student affairs office.

UNC-Chapel Hill is one of many schools that the U.S. Department of Education’s Office for Civil Rights is investigating for potential violations of Title IX, a law that prevents sex discrimination in schools.

Recruiting men to join a campus anti-sexual-assault group isn’t always easy. Concerned students at the George Washington University in the nation’s capital are finding that not everyone is receptive to the kind of training that could help fight the problem.

“It’s not an easy conversation to have,” said junior Ross Berry, the head of finance for the campus group Students Against Sexual Assault. “But just by being here we’re trying to keep asserting that this conversation needs to be had.”

In September, President Barack Obama announced “It’s On Us,” a national campaign to end campus sexual assault. It came as schools across the country said they were trying to reach out to their campus communities and spread the responsibility to others, such as athletic groups, fraternities and LGBT organizations.

Texas State University student Elliot Ives is part of a group that trains men to lead discussions on topics related to violence, including sexual assault. Ives said it is sometimes a tough job.

“Especially if we’re doing a presentation for a fraternity or a sports team, there can sometimes be some active resistance,” Ives said. “And yet even in those groups you can have a lot of people who are very receptive, even if they’re quieter because they feel like they’ve got to appeal to to their peers.”

Texas State, in San Marcos, is one of many universities using techniques to try to get men involved in the movement to end the problem. But sexual-assault prevention doesn’t come in a one-size-fits-all solution for the vastly different colleges and universities around the country.

At Kansas State University in Manhattan, which also is being scrutinized for Title IX violations, school officials hope that men in student government will lead the effort to persuade members of their gender to get involved, said Jessica Haymaker, one of the coordinators of the school’s Center for Advocacy, Response and Education office.

“We’re kind of using that positive role-model stance of there are men who will be active and visible on our campaign, and hoping that helps bridge some barriers and perceptions about who can be a part of this conversation,” Haymaker said.

The university has even changed the name of the organization responsible for handling sexual-assault-prevention education and services, from the Women’s Center to the Center for Advocacy, Response and Education. The Women’s Center had received feedback that the name made some think they couldn’t access the office, said Jenna Tripodi, another of the center’s coordinators.

Like many universities that agreed to join the It’s On Us campaign, Kansas State also plans to highlight and expand its bystander-intervention training, Haymaker said, a strategy touted by the Obama administration and some students as a way to get men to talk about the sensitive subject.

One international fraternity, Delta Chi, found a way to engage its men-only group in the conversation about sexual assault when the director of Student Organizations and Leadership at Sacramento State University decided to draft the legislation for the fraternity, to which he used to belong.

“We took it a step forward and really clarified how we felt about these issues,” said Tom Carroll, who also volunteers for Delta Chi.

Carroll worked with an administrator from the University of Miami on the legislation, and then Delta Chi chapters across the country discussed the resolution. The president of the Sacramento State chapter, Prestley Ateh, said he thought the resolution would help the members talk about preventing sexual assault.

“I think it makes it easier, because we know how our fraternity stands against the issue,” Ateh said.

Other schools have tried to implement men-centered groups in order to encourage them to get involved, with varying degrees of success.

At Texas State University, the group Men Against Violence was created in 1997, said Ives, a junior who’s the organization’s treasurer. It offers presentations on various topics to campus groups and classes and during freshman orientation. While it’s inclusive of all genders, Ives said male presenters were able to relate to other men and help them feel more comfortable.

“When it’s presented by women, male students can often not pay as much attention, or be more disrespectful or just be more aggressive against it,” Ives said. “Whereas if men are presenting, it doesn’t so much seem like they are being attacked.”