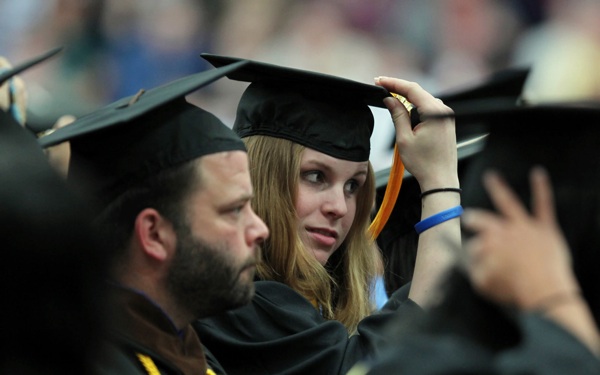 A recent report by Complete College America, called "The Four-Year Myth," found that the vast majority of public college students do not graduate on time. Instead, many are graduating on a six-year time frame. And those who attend a two-year community college are looking at a three-year time frame.

Not only is more time on campus an annoying burden for students, but it costs families money. "As lifetime savings are depleted and financial aid packages run out, the extra time on campus means even more debt," reads the report. Students can face nearly $9,000 extra in tuition at a four-year institution and $3,000 extra at a two-year school.

"And for far too many students," continues the report, "additional semesters do not result in a degree or credential."

Many factors can contribute to a student not graduating on time, including excessive degree requirements, students not taking the credits necessary to graduate and students wasting too much time exploring the course catalog. When an academic adviser is unavailable, students are left to make uniformed decisions. Also, 1.7 million students start college in remediation, but only one in 10 remedial students graduate.

To get students to graduate on time, the reports suggests a Guided Pathway to Success (GPS) system where "students make choices of 'packaged deal' majors, not random courses." Too much freedom and choice could result in students not doing what they're supposed to be doing to complete college in a timely manner.

"Smart institutions aiming to increase completion will offers students choice, to be sure," says the report. "But the choice will be within well-defined limits, or constraints, so that the path to success is clearly marked."