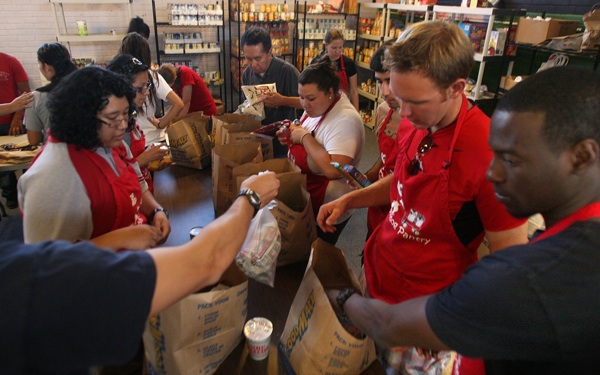 KANSAS CITY, Mo. — Just before fall classes this year, Tyler Huddleston found out a friend wasn’t coming back to Emporia State University because he couldn’t afford to eat.

It was an eye-opening moment for Huddleston, the school’s student body president.

He was part of a student committee that opened a food pantry last month in a corner room of the Student Union.

Emporia is among the latest colleges in Kansas and Missouri to start a food pantry for cash-strapped students. Washburn University in Topeka also opened a pantry last month, Pittsburg State opened one in October and the University of Missouri-Kansas City student activities office is working on opening a food pantry in March.

It’s a growing national trend as campus communities reach out to help students survive the ever-increasing costs of higher education.

Emporia State’s Center for Student Involvement surveyed students to determine whether a pantry was needed. Among students who responded, 42 percent said they had skipped meals because they didn’t have enough money.

“I was surprised at the breadth of the problem,” Huddleston said. “I didn’t realize how many students were affected by this.”

Most students are secretive about not having money for food, he said. He talked to some, especially those living off campus, who cut out meals so they could afford books and rent.

Feeding America, a nationwide network that feeds more than 46 million people through food pantries, soup kitchens and shelters, said in its 2014 report on hunger that 1 in 10 hungry U.S. adults is a student. Two million are attending school full time, and 1 million go part time.

“I just don’t think as college students we like to call ourselves ‘food insecure,’ ” Huddleston said. “I think there is this stigma about revealing that you need help and college students don’t want to ask for help.”

The Kansas Food Bank says 13 percent of Kansans 18 to 29 years old are food insecure. Missouri food bank officials did not have comparable numbers but said 25 percent of 18- to 24-year-olds in the state live below the federal poverty line.

Food insecurity on campus “is clearly a concern,” said Elaine Waxman, spokeswoman for Feeding America. She said her agency has seen an increase in calls from colleges and universities inquiring about starting a campus food pantry.

“It is definitely not just an Emporia State problem; it is a national problem,” Huddleston said. And one, he said, that goes back to the cost of college.

According to the College Board, the average price tag on tuition and fees for students attending a four-year public school in their home state is $8,893 a year. At private schools, it’s $30,094. That doesn’t include housing or food.

The national push to make college more accessible to a more economically and socially diverse population has opened higher education doors to more students. But once financial aid and scholarships get them in the door, some students run into unexpected expenses such as transportation or child care that can tap out an already strained budget.

At some schools, hunger affects a large percentage of the student body. Western Oregon University in 2011 reported that 59 percent of its students were food insecure. That same year, City University of New York said more than a third of the university system’s 250,000 undergraduates went without enough food at some time.

Michigan State University was one of the first four-year schools to open a student-run food pantry on its campus. A year ago, the university was getting so many calls from other campuses asking how to start a food pantry that it launched the College and University Food Bank Alliance.

Missouri, which opened its pantry in 2012, is an alliance member. Its Tiger Pantry, open three days a week, has distributed more than 50,000 pounds of food to students and staff. This year, 405 people have signed up to use the food pantry, most of them undergraduate students or staff members. But a quarter of the students who use the pantry are graduate students.

While undergraduate students are more likely to have a family safety net to help with groceries, graduate students may be older and have homes and families of their own to support while working toward a degree.

“Juggling competing responsibilities, including school, household budget management, and food security, can be challenging,” the Feeding the Hungry 2014 report states. Every year, the report said, “thirty-one percent of households report having to choose between paying for food and paying for education.”