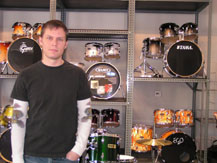 Located amid local recording studios and shops, Chad Sexton, drummer for rock band 311, has opened up a drummer’s haven called Chad Sexton’s Drum City. Having worked at Joe Voda’s Drum City, a drum store in his hometown of Omaha, Neb., Sexton worked alongside his mom, Linda McDonald, who managed the drum store for over 20 years.

Although Voda’s Drum City is long gone, Sexton admits he’s long harbored the idea of owning a drum store in the back of his mind. His vision was to provide a place where drummers of all ages could come and get the personal attention and variety they craved, something that the Guitar Centers of the world often lack.

“The mom and pop-style drum store is what I’m trying to open up again,” says Sexton,  “which had more to do with being a place to hang out and see what other drummers are listening to, to see what they’re doing. I’ve realized how much of my musical background was picked up at the drum store.”

Although CSDC will provide everything a drummer could want – drum sets, signature drum sticks, tour supplies, drum lessons, repairs, and personalized service – Sexton’s main goal is to bring variety back to music retail.

“I’m trying to walk the fine line of doing business but also stocking a lot of stuff, so that new drummers, old drummers, pros, and beginners can come in and see something that the other stores aren’t stocking,” he explains. “Unique items like cymbals with holes drilled into the middle of them, an 11-inch pair of high hats, or colored drum sticks.”

With high vaulted ceilings and skylights, Chad Sexton’s Drum City is a spacious store with a dedicated room for cymbals, another for one for one-on-one drum lessons, along with providing a sprawling selection of drum sticks, carrying signature lines from drummers such as Danny Carey of Tool and Adrian Young of No Doubt.

Sexton’s experience as a drummer began as a tot, taking his first lesson at age seven, then spending five years as a teenager in a drum corps group called the Sky Ryders. “All those years of drum corps were my main lesson,” says Sexton, who admits his drum style in 311 often mimics the fast-paced drumming of drum corps. “It’s like a boot camp for chops.”

With mom at the helm as manager and a focused vision, Sexton is excited to open the doors to his drum store. He prides himself upon working hard at every aspect of the business, winning loyal customers and providing a positive vibe that makes newcomers feel at home.

“Me and my mom do the ordering, we set up the store together, we place things where they think they should go. I take out the drums sets and put them together,” says Sexton with a smile. “Just like I used to do as a teenager. It’s kind of surreal.”