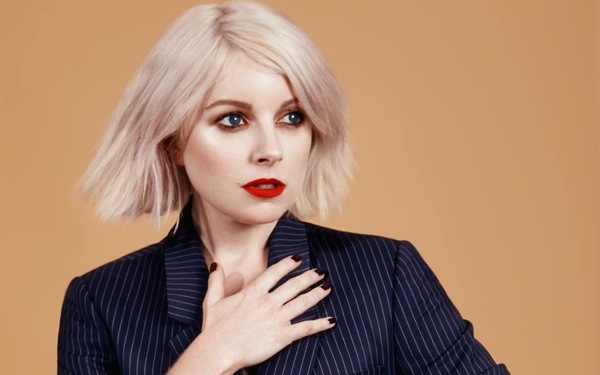 From a major label to owning her own indie imprint, the former “U.K. Lady Gaga” is doing what she loves—by being true to herself.

About five years ago, English recording artist Victoria Hesketh (known as Little Boots) was a pop princess superstar in the making. With her golden blonde hair and porcelain-like skin paired with her light, dreamy vocals, she was fit to become a major label’s pop dream. And for a while, she was. Little Boots released her debut studio album, Hands, on 679/Atlantic Records in 2009, and it was a chart-topping success. Mixing electro pop beats, heavy synths and even disco, Hands’ catchy songs were mostly about relationships, going out and dancing—songs pop music lovers had “Stuck On Repeat” and sought when they needed a little “Remedy” for those dull, unexciting days. Soon after, Little Boots was wearing sparkly, metallic dresses as she sang in her music videos. She embodied the persona of a sultry model inside Vogue and on the cover of other magazines. And, despite being “New in Town,” she was meeting and hanging out with music industry superstars like Kanye West and Katy Perry. Little Boots hit stardom and was quickly becoming the U.K.’s Lady Gaga.

However, by 2013, she had enough. In an editorial piece for the Sunday Times, Little Boots exposed the harsh truths about being in the pop music industry. Pop Life: Managed by the Suits, Ordered How to Look, Controlled was the headline. “The songs I was writing [in summer 2010] were awful and I worked myself into a bit of a hole. I didn’t know what the label bosses wanted and they had even less of an idea,” she wrote. “After a while, I thought, This is stupid, it’s a toxic relationship that has run its course.”

And so, Little Boots did perhaps the most daring and scariest thing an artist can do: she created her own a label. It’s called On Repeat Records.

As her own boss, she has freedom, responsibility and control over her music and creativity. “It’s kind of amazing and scary at the same time!” laughed Little Boots in a recent phone interview. “I didn’t know how to run a business until a year ago, and now I have to make all these decisions, and it’s scary…You have to be really confident and believe in yourself.”

Her confidence seems to be unwavering. The same year she founded On Repeat, Little Boots released her second studio album Nocturnes, building upon the dance-driven sound she explored on Hands by adding a heavy sprinkling of authentic indie pop charm. It lacked the dance pop-addictiveness found on her debut, but it set her apart from other radio pop divas such as Gaga. But, Little Boots pushes herself even further with her latest EP Business Pleasure, which is available now.

She explained the EP is about doing what she loves, which happens to be her business. “I drew a lot of inspiration from the journey I’ve been on, from being on a major label, high pop thing to being something more independent and being my own boss,” said Little Boots. This inspiration is palpable, as the album’s themes of female empowerment and today’s hyperactive culture are quite evident in just the four hypnotic songs.

In the title track’s chorus, the songstress croons, I’m not your girl in the machine…I won’t give up on my daydream. On the EP’s closer, “Pretty Tough,” she asks the listeners, If I was so innocent, would I be a prisoner? and quickly lets them know that’s not quite the case: You think I’m pretty, well I can be pretty tough. Push me a little, I can get a little rough. Little Boots has described herself as a feminist (“I definitely am a feminist,” she told me. “It’s trendy at the moment, but it’s something I’ve always been interested in and supported and explored and read about”), and with these lyrics, one could easily argue Business Pleasure is about girl power.

But then there’s the EP’s first single “Taste It,” a simple track with an equally simple yet powerful music video. Transitioning away from Business Pleasure’s girls-on-top ode, the song is instead a commentary on people’s addictions, including plastic surgery, diamonds, pills, food—anything and everything. You've fallen under the spell. It's all, all that you wanted and more. Glittering out till it falls. Walking this way to your call, sings Little Boots in her airy voice. Colorful images of juicy cheeseburgers, credit cards and human beings packaged as meat slowly scroll across the screen. The British singer was the creative director behind this conceptually original video.

“I’m like a big Pinterest person, and I started pinning those images,” shared Little Boots. “It started to be a conveyor belt, like a commentary on all these things that were body image, success, money, drugs or whatever it is.” She also added, “It’s not taking itself too seriously; it’s a pop song.”

This is a key point for Little Boots fans to remember as the singer continues on her journey. Sure, her hair might be shorter and more blunt, and she’s rocking a simple power suit instead of fancy, glittery, couture-esque costumes on her EP cover. And her most recent songs aren’t exactly tunes you’ll dance the night away to at the club. However, Little Boots is still Little Boots. She’s still a pop singer; she’s just changing her image and sound. We’ve seen Taylor Swift make an incredible leap from country-pop to ‘80s-inspired sugary pop this year with 1989, and even Lady Gaga did the unimaginable and evolved this year with her duets jazz album, Cheek to Cheek, featuring Tony Bennett. Although some critics and fans may be disappointed by these stars’ transformations, that’s just the way it is in the pop industry and in the music industry as a whole. Artists must keep evolving.

Little Boots' Business Pleasure EP is available now, and she said we should expect to see her next album next spring!