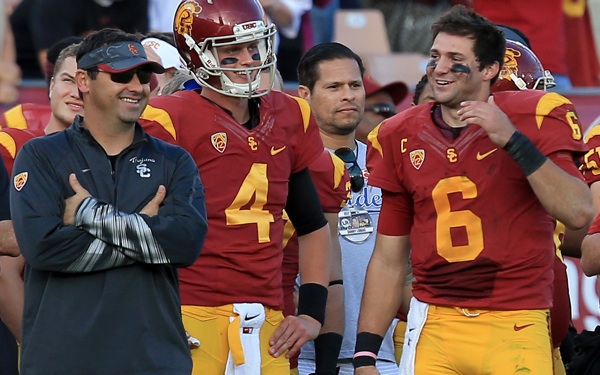 USC players say they do not care what bowl the Trojans play in, as long as it is not the Sun Bowl. You will not a hear a player say that in public, of course, but the trip to El Paso two years ago angered the locals and failed to excite the Trojans.

The good news from USC’s perspective is the Sun Bowl appears uninterested in the Trojans. And it looks like USC will end up playing in a bowl it’s never played in before. For those who believe the Rose Bowl or national-title game should be the destination every year, it might not matter which non-major play takes the Trojans.

It is important to remember that the Alamo, Holiday and Foster Farms bowls are able to pick one team over another if there is no more than a one-game difference in the conference record. For example, a 5-4 team could be picked ahead of a 6-3 team.

The Holiday Bowl might like the Trojans more, but the Alamo picks first and USC would be attractive because it brings the Los Angeles TV market, a sizable travel contingent (unlike many Pac-12 schools) and a nation-wide following as a marquee program.

It might be difficult for the Alamo Bowl to ignore its first reflex to select Arizona State, which is closer to Texas, even though the Sun Devils lost their final regular-season game. The only negative with USC is if the Alamo Bowl realizes Kansas State coach Bill Snyder is already 2-0 against the Trojans and will not be outcoached in this matchup.

It seems hard to believe the Trojans have never played in the Holiday Bowl, but this could be their first appearance. The plus is the idea of 20,000 USC fans driving down the 5 Freeway for the game. The down side is most of them will drive down the day of the game without staying in hotel rooms or eating at local restaurants.

For that reason, Utah might be the secret pick for the Holiday Bowl. But Nebraska will solve the hotel/restaurant issue with its huge following even if it does not bring a coach. Actually, not having the prickly Bo Pelini might cause more Huskers fans to attend the game.

And Steve Sarkisian could talk for three weeks about how it does not matter if Nebraska does not have a coach.

This looked like a nice, safe destination for the Trojans just a couple days ago. But then the bowl signaled its desire to bring in Stanford. Does that make sense? Stanford does not even travel well to its own games, averaging less than 48,000 this season. But if even half of that go to the game, it’s probably considered a good choice.

USC played in the game in 2009 when it was the Emerald (Nut) Bowl. That was Pete Carroll’s final game as Trojans coach. Five years, two coaches and zero major bowl appearances later, the Trojans are still kicking around the mid-tier bowl games while Arizona of all schools looks like it will be playing in the Fiesta or Cotton bowls.