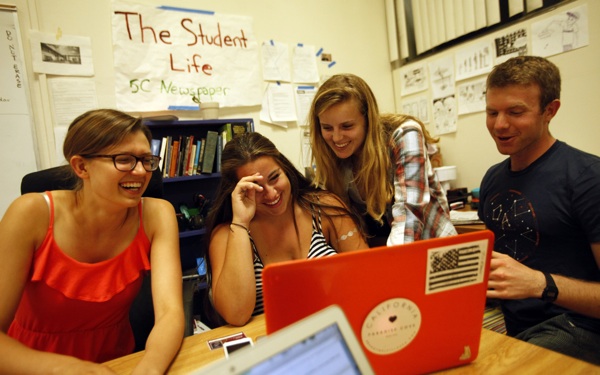 Buried in the back pages of the Claremont Colleges student newspaper, which serves the consortium of five college in California, is a relic from a distant time when Sarah Jessica Parker was still on HBO every week and Facebook didn’t exist. There, the student sex column thrives, amid a decline of such columns elsewhere.

Once common in the early 2000s, Carrie Bradshaw-style articles have become rarer, especially in California. USC, UCLA, and UC Santa Cruz once published weekly articles that focused on everything from bondage to simple advice, but all have ceased.

There are several reasons for the decline, Reimold and others say. Many early columnists used HBO’s “Sex in the City” as a template, and as the franchise faded from screens, sex columnists did, too. Recently, college sexual assault and rape have become hot-button topics, and some undergraduates say that they are reluctant to take a seemingly frivolous approach to a sensitive topic.

Students also are becoming more aware of their digital footprint and are afraid the first thing that will come up when potential future employers Google their name is a graphic description of their sex lives.

Editors at USC’s Daily Trojan recently considered reviving the sex column but found few candidates, said Euno Lee, the paper’s editor in chief. “There’s definitely a PR concern,” said Lee, who added that he gets requests from alumni who ask him to remove stories they wrote as undergraduates from the paper’s website. (Daily Trojan editors have a policy of not taking stories down.)

Accounts of students’ sexual escapades are still popular on many campuses. The Daily Californian’s weekly Sex on Tuesday column is one of the most well-read features at UC Berkeley. One columnist’s recounting of her encounters in the library stacks and other academic buildings drew nearly 200,000 page views.

Reimold said he has never heard of a former sex columnist’s career being harmed by their past; rather, some have gone on to other high-profile entertainment or media jobs, including writing for the TV show “Gossip Girl.”

Elspeth Keller Scott, who wrote a sex and dating column for USC’s Daily Trojan and now writes screenplays, said her columns have never come up in her professional life.

But Keller Scott said she rarely wrote about intimate details. “It was never about what I did last night,” she said.

Lara Lowenstein wrote a sex column for the Daily Bruin for two years in the mid-2000s and was concerned that it would come up when she was applying for jobs or to graduate school. But it was never an issue, so “that worry seems to have been unfounded,” said Lowenstein, who is working on her doctorate in economics at Brandeis University in Boston.

One reason the Claremont Colleges’ sex column may have had such a long run, dating back almost a decade, is that the feature has always been anonymous.

Editors go to great lengths to protect the columnists’ identities. Their names aren’t included in a staff directory, only their phone numbers. Columnists are invited to the paper’s parties, but they don’t have to reveal themselves and often just say that they are contributors “Maybe three people on staff know” who it is, said Caroline Bowman, the paper’s editor in chief.

This year’s columnist applied for the job and initially wanted to use her real name. Editors convinced her not to, so she uses a pen name that rhymes with a sex act.

Remaining anonymous “makes it easier for me to express myself,” she said, “and it won’t come back to bite me in the future.”

Administrators at the Claremont Colleges have never protested any columns, but other schools have threatened to stop advertising over sexual content. Central New Mexico Community College closed its newspaper last year after administrators said one edition that was devoted to sex was offensive and pulled papers from racks, according to media reports, only to return them a day later.