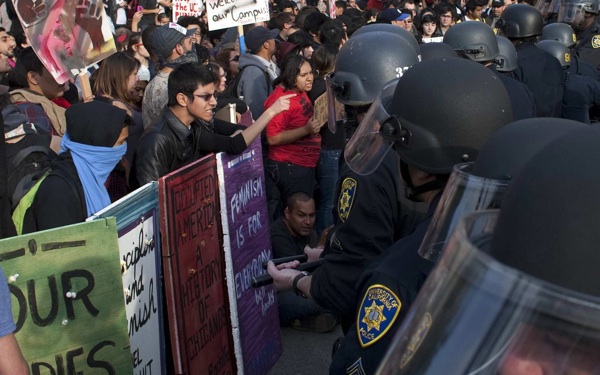 Angered by rising tuition and fat executive pay at the University of California, a bipartisan pair of state senators introduced a bill Thursday to wrest control of decision-making at UC and end its 166 years of autonomy.

The constitutional amendment, SA1, could be decided by California voters in 2016, but would first need to win two-thirds approval in both the state Senate and the Assembly — a high bar. No signature from the governor is needed.

But while a similar bill failed to meet that threshold in 2009, the mood in the Democrat-controlled Legislature is one of increasing frustration with UC’s rising prices: Tuition is 36 percent higher today than in 2009. In November, the regents approved raising tuition by up to 28 percent over the next five years — from the current $12,192 to a possible $15,560 by 2019 — two months after they gave 20 percent raises to three campus chancellors already earning more than $300,000, with apologies that they couldn’t give more.

The public university “continuously attempts to balance its budget on the backs of students by raising tuition,” said Sen. Ricardo Lara, D-Bell Gardens (Los Angeles County). “This constitutional amendment will ensure that the UC is transparent and held accountable to the people of California.”

Powers not listed in bill

The bill doesn’t list specific powers lawmakers would have over UC, where the governor-appointed regents are currently the highest authority. But, under the bill, the elected officials would have the final say over any policy approved by the regents, from tuition levels to executive compensation.

Unlike UC’s 10 campuses, the California State University’s 23 campuses are subject to legislative control over finances and other key decisions, though they are run by a Board of Trustees. Lara, a graduate of San Diego State, favors a similar arrangement for UC.

Republican Sen. Anthony Cannella of Ceres (Stanislaus County) joined Lara in introducing the bill. “All Californians should expect increased accountability and transparency on how taxpayer funds are spent,” he said.

The tuition increases prompted ongoing protests from UC students — the most recent was Tuesday at UC Berkeley — and a “no” vote from Gov. Jerry Brown, an ex-officio regent. State lawmakers have also reacted swiftly with a bill to buy out the tuition hike.

But to UC officials and faculty leaders, the idea of relinquishing the autonomy UC has enjoyed since the state Constitution was signed in 1848 is counterproductive.

“If it’s about accountability, the University of California already is accountable in multiple ways, including regular reports to the Legislature and administration, the presentation and approval of a budget every year, and an annual accountability report — all of which are publicly accessible,” said Steve Montiel, UC’s spokesman.

Montiel also pointed out that as an autonomous institution, UC has not only added students, it has grown into “the best public university in the world ... even as it absorbed nearly a billion dollars in funding cuts during the recession.”

Faculty leaders also scoffed at the idea of what would essentially be a hostile takeover of the university.

“The faculty would vigorously oppose such a move,” said Mary Gilly, chair of UC’s Academic Senate.

Proposals to wrest all or partial control of UC from the regents “seem to come up any time state legislators seem to think the regents are making poor decisions,” Gilly said. “It’s just the way the wind is blowing, and that’s not the way to run the university. ... The regents are the appropriate body to be making independent decisions, free of political whims.”

The regents have resisted efforts to examine their operations more closely even when required to by law. A 2013 law, for example, gave UC more than a year to tell the public how much it spends to educate undergraduates versus graduates, how much it spends on research, and how much money from each funding source goes to each area. UC currently lumps those expenditures together in an “average cost of instruction.”

In a recent story, The Chronicle revealed that UC has let deadlines come and go, with vague promises of complying at a future date.

Lara’s staff said there are practical reasons to bring UC under the legislative umbrella. They pointed to the city of Berkeley’s recent minimum-wage increase and said hundreds of student employees at UC Berkeley can’t benefit from the higher pay because of UC’s autonomy.

It isn’t clear, however, whether state control over UC would lead student workers to benefit from a city law — although the state could potentially order UC to allow it.

While UC labor unions haven’t yet taken a position on the new legislation, some are clearly intrigued by it.

“Sen. Lara’s proposed constitutional amendment reflects the public’s growing distrust of how UC is managing its money — raising tuition while padding the pockets of its growing executive class,” said Todd Stenhous, spokesman for UC’s union representing custodians, food workers and other low-wage earners in Local 3299 of the American Federation of State, County and Municipal Employees.