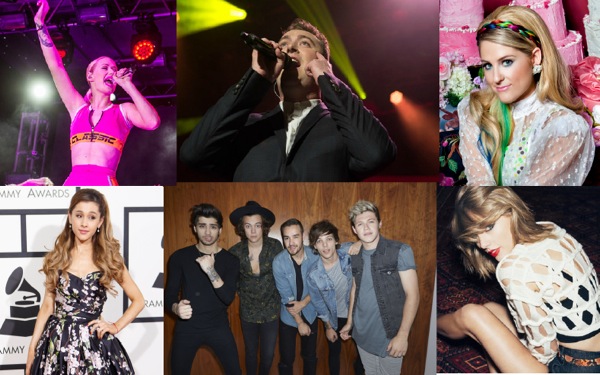 On Friday, the nominees for the 57th Annual GRAMMY Awards were announced—and boy, will this be a fun awards show!

And speaking of Queen Bey, the diva superstar has made Grammy history: She is the most-nominated female artist, with a total of 52 nominations.

Twerking-extraordinaire Miley Cyrus will surely be in great spirits tonight, as the former Disney star scored her first-ever Grammy nomination with Bangerz (Best Pop Vocal Album). But in order to win, she’ll have to beat out many pop heavyweights, including Ariana Grande, another artist getting her first Grammy recognition. She is also nominated for Best Pop Duo/Group Performance for this year’s “Bang Bang” with Jessie J and Nicki Minaj.

Minaj is the only female nominated in Best Rap Song for “Anaconda,” and surprise multi-Grammy nominee Iggy Azalea must also beat a bunch of males to win Best Rap Album for The New Classic. Azalea is also nominated for Record of the Year ("Fancy"), Best Pop Duo/Group Performance and Best New Artist.

Lovebirds Tim McGraw and Faith Hill are nominated for Best Country Song for “Meanwhile Back at Mama’s.” The country singers have been nominated five times for Best Country Duo/Group Performance, and they’ve won twice. Also in the country categories, Miranda Lambert and Eric Church are tied with four nominations each.

Best Rock Album sees some strong contenders, including U2 who is the most Grammy-nominated group in history with a total of 46 nominations. However, this category along with Best Rock Song will be a tight race with artists such as Ryan Adams, Paramore, Jack White and The Black Keys competing against one another.

But perhaps the hardest category to predict this year will be Record of the Year and Song of the Year. Smith (“Stay with Me”), Taylor Swift (“Shake it Off”), Sia (“Chandelier”) and Meghan Trainor (“All About that Bass”) were nominated in both categories.

Swift’s 1989 didn’t release in time to be considered, but there are still some snubs we can’t ignore. One Direction failed to get any nominations for album Midnight Memories, and Lady Gaga only got nominated in one category (Best Traditional Pop Vocal Album) for her duets album Cheek to Cheek. 5 Seconds of Summer also didn’t score a nomination for Best New Artist.

Below is a list of nominees for some of the major categories:

RECORD OF THE YEAR
“Fancy,” Iggy Azalea ft. Charli XCX
“Chandelier,” Sia
“Stay With Me,” Sam Smith
“Shake It Off,” Taylor Swift
“All About That Bass,” Meghan Trainor

SONG OF THE YEAR
“All About that Bass,” Meghan Trainor
“Chandelier,” Sia
“Shake it Off,” Taylor Swift
“Stay with Me (Darkchild Version),” Sam Smith
“Take Me to Church,” Hozier

BEST POP SOLO PERFORMANCE
“All of Me, “John Legend
“Chandelier,” Sia
“Stay with Me,” Sam Smith
“Shake it Off,” Taylor Swift
“Happy,” Pharrell