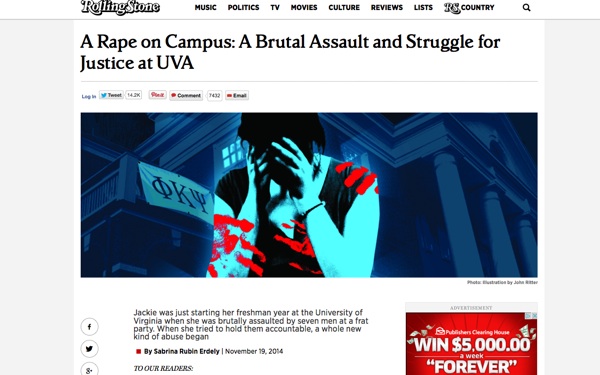 The article accused the university for failing to respond to the alleged attack, and the story went viral. It was re-tweeted more than 14,000 times, and it received more than 7,000 comments. After the story published, UVA suspended all fraternity activities. To say it had an impact would be an understatement; it significantly affected students, the university and readers.

But now, Rolling Stone's managing editor, Will Dana, revealed there might be discrepancies in Jackie's account. And according to the fraternity, Phi Kappa Psi, there was no event scheduled on the weekend in question.

On Friday, the fraternity released a statement that read:

Our initial doubts as to the accuracy of the article have only been strengthened as alumni and undergraduate members have delved deeper...

As far as we have determined, no member of our fraternity worked [at the Aquatic and Fitness Center as a lifeguard] in any capacity during this time period.

Second, the Chapter did not have a date function during the weekend of September 28th, 2012.

In an editor's note, Dana explained the reporter did not contact Jackie's accused rapists or the lifeguard (who allegedly orchestrated the attack) because of the sensitive nature of her story.

Dana wrote the Rolling Stone has "come to the conclusion that our trust in her was misplaced. We were trying to be sensitive to the unfair shame and humiliation many women feel after a sexual assault and now regret the decision to not contact the alleged assaulters to get their account."

According to the New York Times, the discrepancies were first pointed out by the Washington Post. The Post reports that although some of Jackie's friends believe something traumatic happened to her, Jackie's story changed over time. They come have come to doubt some of her account.

"We are taking this seriously," Dana continued in the editor's note, "and apologize to anyone who was affected by the story."