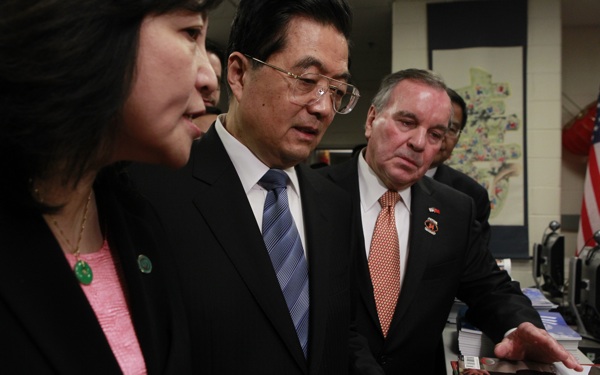 WASHINGTON — The Chinese government’s influence over American universities is broad and deep, ranging from such subtle pressures as the denial of visas for vocal American scholars to more overt efforts, including opening Chinese cultural institutes on U.S. college campuses, experts on human rights and education told lawmakers Thursday.

That influence has become more pronounced as American universities open satellites campuses in the country and welcome Chinese government-funded programs on their stateside campuses, experts said.

“U.S. colleges and universities should not be outsourcing academic control, faculty and student oversight or curriculum to a foreign government,” Rep. Christopher H. Smith, R-N.J., said at a House Foreign Affairs Committee hearing. He said he would call for a Government Accountability Office study into academic agreements American universities have made with China.

Much of the debate centered on the Confucius Institutes, Chinese government-sponsored cultural centers at universities worldwide. Funded by the Chinese government, the institutes provide language instruction and sponsor cultural exchanges, but some experts worry they allow China to engage in “soft power” propaganda campaigns and encourage censorship over certain topics.

China says the institutes — which experts estimate could number more than 400 worldwide — are established only at schools that invite them and do not force their curriculum on any campus.

Experts suggested that the federal government could do more to finance Chinese-language programs within the United States, rather than relying on Chinese funds to do so.

“Why should we hand our young people over to an authoritarian government because they supply the funds?” asked Perry Link, a Chinese-language professor at the University of California, Riverside. “We have enough funds for that.”

Experts also called on lawmakers to withhold visas for Confucius Institute instructors as long as China continues to do the same for American scholars.

Mainly, they said, American universities must do more in their negotiations as they develop partnerships with China, pushing for broader discussion rather than quieting debates over controversial topics on their campuses.

“If you don’t stake out the borderline, natural self-censorship will stick in,” Link said.

Prestigious American institutions, including New York University and Carnegie Mellon University, have partnered with Chinese universities to open satellite programs there. Many institutions maintain that their influence will lead to gradual change within the authoritarian Chinese government, Smith said. But he challenged academic leaders to reconsider their positions, given what he said was pervasive self-censorship by American scholars.

Human rights observers noted that American universities often pledge to uphold Western ideals of free speech on their Chinese campuses, but few, if any, of these promises have been put to the test.

It’s unclear how American colleges would react if, for example, a student on their Chinese campus wanted to host a symposium on Tibet, a fraught topic in China, said Sophie Richardson of Human Rights Watch. For university administrators, such a situation would be “one of their worst nightmares,” she said.

Scholars within China face significant consequences for research into unfavorable topics, such as the 1989 protests and crackdown at Tiananmen Square and the imprisonment of Nobel Prize-winning human rights activist Liu Xiaobo.

Economics professor Xia Yeliang lost his position at Peking University in 2013 for his political activism, supporters say. Despite protests on his behalf, Wellesley College, which partners with Peking, chose not to terminate its partnership with the Chinese university.

“How can you export ideals to authoritarian countries if you can’t persist on your own ideals?” Xia asked lawmakers.

Earlier this year, the University of Chicago chose not to renew its contract with the Confucius Institute on its campus, citing an “incompatible” relationship.