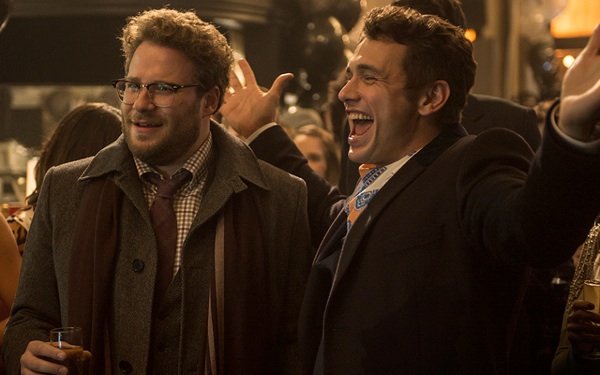 Seth Rogen and Evan Goldberg's office on the Sony Pictures lot is a lot like you might imagine it to be. A glass marijuana pipe sits on the desk beside Rogen's computer along with an ashtray filled with the butts of half a dozen joints. An arsenal of Nerf guns lines a shelf along one wall.

On a mid-November afternoon, the sound of yelling could be heard from the next room, where employees of Rogen and Goldberg's production company were playing the video game "NBA Jam," to which a great deal of time has been devoted lately. "If our next movie sucks, it'll be because of that," Goldberg said, deadpan.

Since breaking out as writers and producers of 2007's Superbad and 2008's Pineapple Express, Rogen and Goldberg have found tremendous success mining comedy gold from the humble terrain of immature man-children. But with their new comedy, The Interview, the pair is taking on their ostensibly most serious subject yet, shifting from dazed and confused stoners to the global stage — and as a result, almost like characters in one of their own buddy comedies, they've wandered into the middle of an international incident.

Best friends since childhood, Rogen and Goldberg, both 32, were in this office one morning in late June when they heard the news that the North Korean regime was threatening retaliation against America over The Interview. In the comedy, which opens Christmas Day, James Franco and Rogen play, respectively, a vapid talk-show host and his producer who are recruited by the CIA to assassinate North Korean leader Kim Jong Un (Randall Park).

A spokesman for North Korea's Ministry of Foreign Affairs said the film was tantamount to "an act of war" and threatened "a decisive and merciless countermeasure" if the U.S. government allowed it to hit theaters.

You might think such a warning would be greeted with alarm and perhaps an anxious call to the State Department. But Rogen and Goldberg had a different reaction.

"There was a lot of high-fiving," Rogen said, letting out his distinctive, rolling huh-huh-huh laugh. "It was exciting!"

Though their movies haven't always been met with universal acclaim (the 2011 superhero misfire The Green Hornet comes to mind), this is the first time one has raised the ire of a rogue state. In the wake of the recent crippling cyber attack on Sony's computer system, there has been speculation that North Korea may have been behind the hacking in retaliation for the film.

Make no mistake, though: Although The Interview portrays Kim Jong Un as a megalomaniacal despot who lives in luxury while his people starve, it is no polemic. Nor is it a Ridley Scott- or Michael Mann-style thriller (though Rogen and Goldberg watched those movies for inspiration). It's a flat-out over-the-top comedy, a bizarro espionage story shot through with gleefully crude and frequently absurd sexual and scatological humor. Imagine Stanley Kubrick's Dr. Strangelove or Charlie Chaplin's The Great Dictator with 1,000 more penis jokes and you're somewhere in the ballpark.

"You never know if a movie is going to be funnier or better than your last movie," Rogen said. "But what we always think is, 'Maybe we can make the next movie crazier.' So it's nice when you hear, 'This movie is really crazy.'"

Rogen and Goldberg have been on a roll that has made them one of the most powerful comedy teams in Hollywood. Last year, their directorial debut, the apocalyptic comedy This Is the End, earned rave reviews and proved a sizable hit. This summer's Neighbors, which they co-produced and Rogen starred in, earned more than $268 million worldwide and was praised for offering a fresh, clever twist on the often dumb frat-comedy genre.

For the two, who first met at age 12 in bar mitzvah class in their native Vancouver, Canada, it all comes back to the love of unapologetically juvenile humor they shared from an early age. "Our comedic sensibility was shaped in a lot of ways by what happened in high school," Rogen said. (Their production company, Point Grey, is named after the secondary school they attended.) "That's why our movies are so immature and stupid."

Rogen and Goldberg began their filmmaking careers as proteges of Judd Apatow. Rogen's first acting role was on the TV series "Freaks and Geeks," which Apatow executive produced, and years later the two served as executive producers on Apatow's 2007 comedy Knocked Up, which starred Rogen. To this day, their brand of comedy shares the Apatowian blend of heart and raunchiness, though perhaps leaning somewhat more toward the latter than the former.

When it comes to making comedies, the two seem almost preternaturally connected. Actors in their films routinely marvel at how in sync they are. "We have no division of labor," said Goldberg. "I don't act, but other than that we have the same skill sets. It's not like I'm the visual guy and Seth is the talk-to-the-actors guy."

As with many of their comedies, the germ of The Interview sprang out of idle kidding around. Three or four years ago Rogen and Goldberg were having a conversation about TV reporters who score major interviews with notorious figures like Osama bin Laden. "We were joking, like, 'Why don't you just kill the person?'" Rogen said. "We thought that could be an interesting idea for a movie: a journalist gets an interview with an evil world leader and then they're asked to kill him."

Early on, the two settled on the idea of making the leader of North Korea — who at the time was Kim Jong Il — their film's villain. "It's not that controversial to label [the North Korean regime] as bad," Rogen said. "It's as bad as it could be." Recognizing their own limited knowledge of foreign affairs, the two brought on writer Dan Sterling, who had worked on "The Daily Show," to help write the screenplay.

Initially Sony had concerns about making comedic hay out of a plot to kill a real world leader and asked if Rogen and Goldberg would consider substituting a fictional dictator instead. "There was some resistance to us calling him Kim Jong Un," Rogen said.

"I wouldn't even say 'resistance,'" Goldberg added. "It was a conversation. They were like, 'Is that really the funniest way to go?'"

The more Rogen and Goldberg researched North Korea, though, the more convinced they were that the cult of personality surrounding the country's leader offered unique and irresistible comic fodder.

That said, they didn't want to turn the North Korean leader into a cartoonish bad guy. Rogen and Goldberg encouraged Park to humanize the dictator, highlighting, for example, his struggle with the weight of his father's expectations. "The crazy aspects were already there, so it was important to present a well-rounded version of him instead of a caricature," said Park.

In the end, Franco says his character, Dave Skylark, who hosts an insipid celebrity talk show, is equally the butt of the joke in the film as Kim. "Dave is a horrible public figure in his own way," Franco said. "The movie satirizes American celebrity culture as much as it does North Korea."

That may well be. But in June, when North Korea started rattling its saber, it was a gut check for Rogen, Goldberg and Sony, which had invested roughly $35 million in the film's production and, as one arm of a vast multinational corporation, is generally not interested in stirring global controversies.

"There was a moment where everyone got in a room and we were like, 'OK, so that happened,'" Rogen said. "We were just making sure: 'So everyone's cool? We're not going to shy away from this?'"

At that point, The Interview had already been screened for test audiences, and the results were strong enough to help allay whatever fears Sony may have had. Not only did the studio decide to proceed with the movie, it doubled down, shifting it from its planned Oct. 10 release date to a plum Christmas debut.

"Maybe if this was a movie nobody liked, they'd have gotten rid of it, because who wants to be the studio that caused a nuclear war?" Rogen said. "But they could see that people really loved the movie."

As unnerving as North Korea's threats over the film may have been, the team behind The Interview recognized that they represented an invaluable piece of free advertising. Sacha Baron Cohen used similar protests from the nation of Kazakhstan over his 2006 comedy, Borat, as part of that film's marketing campaign to great effect.

"One of our first calls [after the North Korean protests] was from Sacha, congratulating us," Rogen said. "He was like, 'Hey, man, I never got a nuclear war threatened!'"

Still, when an unstable nuclear armed dictatorship starts throwing around angry protests, it's not entirely to be ignored. Rogen and Goldberg have been told there's a good chance Kim's regime has already seen The Interview via some sort of digital spying. If so, it's safe to assume the North Koreans weren't amused.

As the film's release nears, Rogen and Goldberg have been advised by experts on North Korea to take precautions against potential retribution such as changing their bank passwords. "A lot of magazines are going to start showing up at my house," Rogen joked. "'[North Korea] signed me up for all these mailing lists!'"

Granted, this conversation took place days before the mysterious Sony hacking, but at that point Rogen and Goldberg were clearly not worrying. After all, North Korea lodged similar if somewhat less incendiary-sounding complaints, over the 2004 all-puppet comedy Team America: World Police, which depicted Kim Jong Il as a lonely, English-language-mangling despot who "was sent from the planet Xiron to conquer the Earf." And that didn't lead to nuclear Armageddon.

"From our research, we know this sort of insane rhetoric is their bread and butter," Rogen said. "It's all for show."

For its part, Sony — which could use another big hit like last summer's 22 Jump Street — has marketed The Interview as more an outrageous Seth Rogen-James Franco comedy than any kind of hot-button political movie. A little controversy can be good, but too much can become box-office poison.

Meanwhile, Rogen and Goldberg are already looking to their next projects. Leveraging their successes, the two are looking to break into new genres and formats. They are developing a TV adaptation of the dark, violent "Preacher" comic-book series and are writing and producing an animated comedy called Sausage Party, a sort of demented, very R-rated take on Pixar-style movies due in 2016.

As for their next directing project, they are looking to branch out there as well. "A couple of days ago we were like, 'Maybe it's time to move off of male-friendship movies a little bit,'" Rogen said. "We've explored that a lot, and maybe it's time to try another thing."

Unless, of course, The Interview starts World War III, in which case all bets are off.

Rogen laughed. "And if it does start a war," he said, "hopefully people will say, 'You know what? It was worth it. It was a good movie!'"