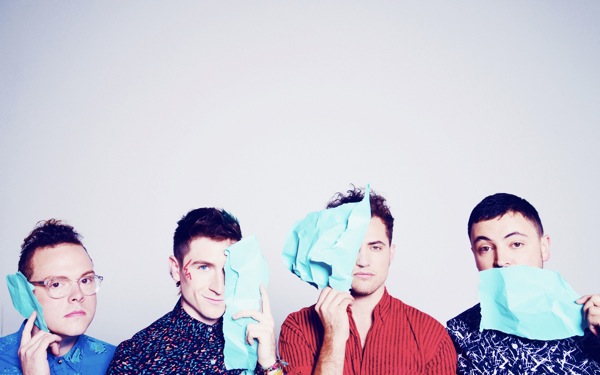 After the release of the band's self-titled debut album, Walk the Moon fans have been patiently waiting for  new music. Their single "Shut Up and Dance" has been attacking the radio airwaves for a while now, teasing and pleasing our ears, but we obviously wanted more. Thankfully, we were not disappointed with the band’s sophomore album Talking is Hard, which provides up-tempo beats for dancing at those red light stops till the end of the year.

“Different Colors” starts the album off on a positive beat. Its high-energy is what captures your attention. Walk the Moon stuck to their original sound and style for this track: “This is why, this is why, we crank the dial to the right.” Trust me, this one will be one of those songs you would want to play in your car all the time.

On “Up 2,“ the band shows everyone they aren’t just a pop-sounding boy band with lyrics like “It’s hard enough just making money/It’s hard enough just trying to feel alive/Meanwhile our fever is running/and the kings bow down to the dollar sign.” This track offers an alternative style that is new to the band, and the vibe the guys are giving out compares to that of the Black Keys. However, Walk the Moon never strays too far from their original roots.

A cute song that talks about getting down and dirty, without actually stating it, “Come Under the Covers” showcases Nicholas Petricca’s quirkiness and charm as he sings, “Come under the covers ‘cause I want to leave you satisfied tonight.”

The opening to “Aquaman” makes me feel like I’m in a time warp, like I’m listening to an ‘80s pop song. When the vocals come in, it just makes you feel cozy and loved: “So here we go head first/No regrets and no rules/We can stay as long as we want/Slow dancing in the darkness.” They close the album with this upbeat love song that I'll have on repeat on my iPod.

Talking is Hard has a nice flow to it, and the beat just makes you want to be happy and in love. I’m sure that once Valentine’s Day rolls around, fans will be listening to this album nonstop.

One thing I will say: Although the tracks sound amazing because of the beat, the lyrical content and message isn’t really there. Pass on this album if you prefer music that has some substantial meaning coursing through its lyrics.

Talking is Hard is out now.