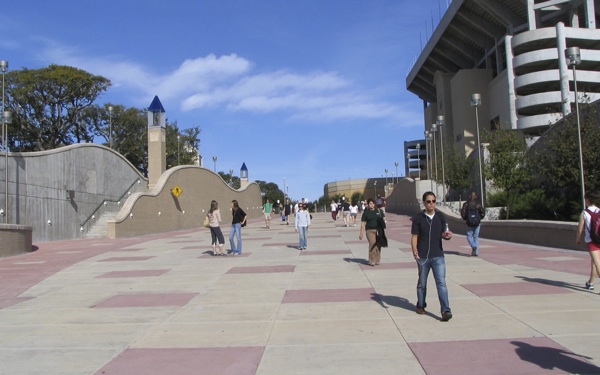 The alarming government statistic that 1 in 5 women is sexually assaulted while in college has been cited by the Obama administration and in frequent news reports as it has become a rallying cry for changes on campus.

But critics claim the assault figure — taken from a survey that includes questions about acts that range from forced kissing and touching to rape — is inflated and unrepresentative, and is leading to panic and hasty decisions by college administrators who need to address a complex problem.

“It’s not a question of whether the university needs to address this,” said Samantha Harris, director of policy research at the Foundation for Individual Rights in Education, which advocates for students’ rights at colleges and universities. “It is allowing a moral panic to prevail and preventing clear heads from crafting a solution that is fair to everyone involved.”

Experts say that getting accurate findings on rape and sexual assault is challenging and depends on how the crimes are defined and measured.

Despite that, other large studies have found similar rates of rape and assault among women. Advocates for women say that even if the statistic is inflated, the problem is real and that takes away nothing from its significance.

The 1-in-5 number, gleaned from a 2007 survey by the National Institute of Justice, a division of the Justice Department, was at the forefront of a report issued in January by a White House task force on sexual assault. The statistic was highlighted in news coverage of two reported rapes at Ramapo College and William Paterson University in Wayne in the past three weeks that resulted in the arrests of 10 students.

The statistic also was noted in news stories about an alleged gang rape at a fraternity party at the University of Virginia that was first reported in Rolling Stone and led to the suspension of the university’s fraternities. Discrepancies have been cited in the account of the chief source in the Rolling Stone article as other news agencies have reported about the alleged attack.

In that 2007 survey, nearly 20 percent of 1,402 seniors reported they were sexually assaulted while in college, according to findings that were published in a 2009 article in the Journal of American College Health. That included forced touching of body parts, forced kissing, forcible rape, or rape when women are not able to consent because they’re too impaired, typically by alcohol or drugs.

The majority of the women who reported that they had been assaulted said they had indeed been raped, said Christopher Krebs, a principal investigator of the Campus Sexual Assault Study and a researcher at the non-profit RTI International.

The findings only looked at the experiences of women at two large public universities, so may not be representative of women at all colleges, the article noted.

“It’s been trotted out there like a national estimate, but that is certainly not what we intended or believed when we conducted the study,” Krebs said. “Certainly we didn’t think of our study as nationally representative.”

Experts say sexual assault studies are shaped by how questions are asked, age ranges surveyed, survey methods and the scope of assaults that are included. They also depend on answers from a population that includes victims who may be reluctant to talk about assaults out of fear, shame or denial.

“All the sexual violence studies that try to measure prevalence are all flawed in one way or another,” said Dean Kilpatrick, director of the National Crime Victims Research and Treatment Center at the Medical University of South Carolina. “They use certain definitions or only reach a certain segment.”

To encourage honest reporting, the 2007 survey was given online for privacy and anonymity. The survey also asked detailed questions that described what assault and rape are, noting that some women do not know that what they experienced was assault or rape, Krebs said.

Some critics have charged that the sample of women in that survey was too narrow and the definition of sexual assault too broad. They question whether rape while incapacitated can be reported accurately or would lead to too many “gray areas.” Some leaders of conservative organizations, like the American Enterprise Institute and the Independent Women’s Forum, say they believe the statistic is inflated and that the publicity around it was driven by a feminist political agenda.

Other studies of sexual assault have led to findings that between one-fifth and one-quarter of women were raped during college, and those studies have also faced scrutiny and criticism over their methods and findings.

Advocates say the quibbling over statistics misses the big picture.

“Whether it’s 1 in 5 or 1 in 10, that’s still a huge problem and it’s still unacceptable,” said Karen Baker, director of the National Sexual Violence Resource Center, a nonprofit focused on improving sexual assault response and prevention.

Mary Koss, professor of public health at the University of Arizona, was critical of the exclusion of other national research from the White House report. She also questioned how, with so many different methods of research, many studies arrived at similar estimates.

“It seems that as long as you arrive at a number that is widely considered to be right, then people don’t look that carefully at the methods of the study,” said Koss, whose expertise includes violence against women.

Harris said sex assault was clearly a serous problem that universities need to address, but that overstating the problem was problematic. “That number is so shocking that we feel it’s led to some hasty actions that have not been in the best interest of all parties involved,” she said.

The Foundation for Individual Rights in Education, which fights for student and faculty rights, is representing students who said they have been falsely accused of sex crimes or denied fair treatment under state or college judicial processes.

“We get reports from accused students,” she said. “It seems like the pressure to address this effectively leads to abandonment of due process that universities should be offering.”