Protesters: Why We March, What We Want 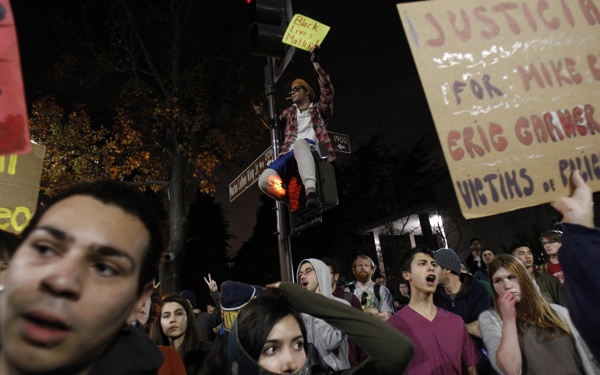 Their protest tactics may vary, and their end goals may be different.

But demonstrators who have taken to the streets of Berkeley, Oakland, San Francisco and other cities in recent days say they agree on an overriding point: Law enforcement in the U.S. is poisoned by racial bias that wounds or kills people of color and must change.

How to spur that change is a more difficult question. In interviews, some demonstrators talked about specific ideas they wanted to fight for, while others said they believe that simply raising awareness is a critical step. Some want reform, others revolution.

The acts that ignited the protests — decisions by grand juries not to indict white police officers in Missouri and New York who killed unarmed black men during confrontations — are seen by demonstrators as symptoms of wider inequities that call for fundamental change.

“The war on black people is very real,” said Kharyshi Wiginton, 39, who was part of a group of people that shut down the West Oakland BART station on Black Friday.

Protests over police conduct are nothing new. During the Occupy movement, even as people focused heavily on the gap between the rich and poor, anger at police was a recurring theme in the streets.

Now it is the central theme. At marches, demonstrators shout the names of young people of color who have been killed by Bay Area police over the years: Oscar Grant and Alan Blueford in Oakland. Alex Nieto in San Francisco. Andy Lopez in Sonoma County.

For some people around the Bay Area and the country, these are seen as distinct incidents with unique sets of facts that, in many cases, justified the use of lethal force.

But for those rallying for change, the fact that such shootings disproportionately feature Latino and black men is clear proof of bias.

“We can’t have business as usual while our children are being shot down in pools of blood,” said Sarah Menefee, 68, a San Francisco resident who protested in Oakland after the Ferguson decision. “Our youth have no future under this system. Something has to be done. We’ve got to stop this killing machine.”

Some protesters have advocated for changes they believe can help fix policing and criminal justice, such as having independent investigators probe police shootings rather than local police and prosecutors.

Some have called for a “demilitarization” of law enforcement agencies across the country, which over the past decade have been acquiring old Department of Defense gear to use in their operations.

UC Berkeley student Nick Randhawa, 28, held up a mirror that he said was meant for police officers at a Monday march near campus.

“Want to see who came to riot?” was written on the mirror in black ink, a reference to officers’ use of helmets and armor, which they say are crucial for their safety. “Look for who dressed for a riot.”

A few people at rallies spoke in support President Barack Obama’s push for police officers to record their interactions with suspects on body cameras.

However, after a Staten Island grand jury declined to file charges against the white officer who killed Eric Garner — though the officer’s choke-hold was caught on video — a protester carried a sign through Oakland stating, “Body cameras are worthless if a person can be choked to death on video and there is no indictment.”

Protesters said bringing attention to race relations and the role of race in policing was an important step on its own.

Rebecca Pierce, 24, said at an Oakland rally that her black relatives in Missouri felt disenfranchised when it came to dealing with police. She said the protests sent a sign to them that they were not alone.

“Talking to my family, they felt so alone, like no one cared,” Pierce said. “I think this is an incredible show of support.”

San Francisco State student Danielle Wright, 21, said at a San Francisco march that she hoped the demonstrations would educate the public on what it means, and how it feels, to be black in this country.

“As a black woman, this resonates with me personally,” she said. “I’ve been followed in malls and stores under the assumption I was stealing, and my uncles and cousins have too. It happens every day.”

Protest tactics, though, are a source of constant debate on the streets.

While many demonstrators have been satisfied shutting down freeways and rallying support in low-income neighborhoods, others favored destruction, as on the nights when protesters smashed windows, spray-painted graffiti and threw bricks and rocks at the police line.

On Sunday night in Berkeley, seconds after a first window was broken at a Radio Shack store on Shattuck Avenue, boos rained down from the crowd on the rock thrower as a chant of “Peaceful protests!” broke out.

But elsewhere, others were still chanting “No justice! No peace!” — a contradiction that was not lost on one man in the crowd who voiced his displeasure.

“You can’t have a peaceful protest and go around yelling, 'No peace,’” he shouted to the crowd. “It’s asinine!”

At another Berkeley protest, a shrouded demonstrator who advocated for the destruction of property but would not reveal his identity, said, “Nobody gets free by begging. We make the changes we can through disorder.

“We want the utter and complete destruction of the police, the U.S. government, capitalism, racism and patriarchy,” he said, pointing out that the property damage was mostly directed toward banks and other large corporations. “We achieve that with arms. That is how every other revolution has happened.”

Still others argued that revolution begins in mindset and culture.

On Tuesday, Richmond Police Chief Chris Magnus, several of his captains and deputy chiefs gathered to demonstrate with about 150 others at the RYSE community center along McDonald Avenue. Magnus held a sign reading, “Black lives matter,” one of the rallying cries that has emerged in recent demonstrations.

“This represents a positive relationship between the police and the community,” he said. “We know everybody and they know us. Relationships take time to build and they can be fragile sometimes, but they’re essential if we are going to understand each other and have meaningful dialogues.”

Magnus said his strategy of assigning officers to neighborhood beats helps them build trust with residents.

“There are always going to be issues that come up between residents and police,” he said. “At times people feel we disappointed them. At times we make decisions people don’t agree with. But this model of policing builds a bank account of trust.”