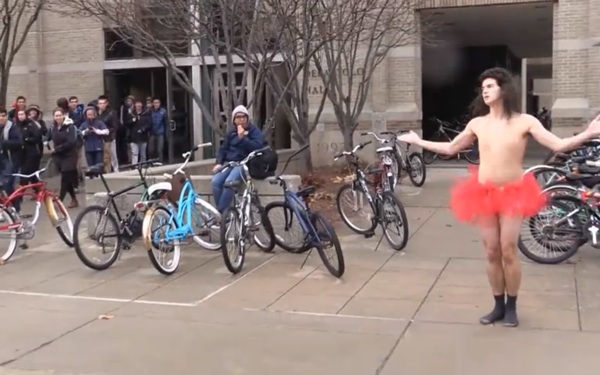 Sia's "Chandelier" music video is one of the most iconic videos of the year. The songstress doesn't appear in it, but little Maddie Ziegler from "Dance Moms" does. She leaps and spins as she dances around in a nude leotard, donning a bleach-blonde wig on her head. With Sia pouring her soul into the emotionally dripped lyrics about a party girl struggling with alcoholism and Ziegler playing the part of the broken character, the video is eerie yet powerful.

This video, starring University of Notre Dame student Henry Long, is nothing like that.

The male student sheds his sweatshirt and pants for a tutu, and places a short brown wig on his head before he performs "Chandelier." Embodying the 12-year-old dance prodigy, Long prances outside in the cold, and inside university buildings and cafes, making his classmates chuckle and laugh.

And he made us laugh, too. Thanks Henry, for that uninspiring but entertaining-as-hell rendition of "Chandelier."