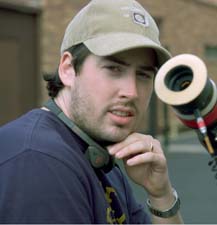 An adaptation of Christopher Buckley’s novel of the same name, Thank You for Smoking is writer/director Jason Reitman’s feature film directorial debut. Emanating from “spin culture” and the octopus-like reach of corporations and “big” business, the film will likely raise eyebrows with its biting satire, crisp dialogue and memorable depiction of Washington elite’s “processing” and “molding” the truth, instead of telling it.

“Much of the dialogue is taken straight out of the book,” Reitman says. Delivering his own screenplay, Reitman wanted little or no improvisation from the leading ensemble cast (Aaron Eckhart, Maria Bello, Robert Duvall, Cameron Bright, Adam Brody) in order to adhere to the novel. A delicious blend of satire, humor, political commentary and cynical “resistance to authority” interlace in almost every scene, creating a vivid and lively portrayal of lobbying and corporate elitism.

After reading the thematically-rich novel, the key challenge was “cutting stuff and establishing tone and mood,” Reitman says. In order to bring the material to the screen while maintaining the hilarity of its political satire, he did little to change the content of the novel.

Thank You for Smoking is a visual incarnation of “spin” culture and the divorce between corporate lobbying and social responsibility. One of Reitman’s motives in writing and directing is the personal connection he felt with “resisting authority” and taking a cynical stance towards it. “I immediately identified with both Christopher Buckley’s voice and that of Nick Naylor,” he says.

In spite of the complexity of the topic and the richness of the novel, Reitman spoke about his first feature-length motion picture with a carefree attitude, understated confidence and self-effacing humor, not realizing the narrative power and likely cross-age appeal it would have. “Everyone seems to have enjoyed the screenplay as is,” he says.

“I don’t smoke; I don’t do any drugs; I don’t drink. I grew up in the film industry and I’ve never even seen cocaine,” Reitman reveals, in spite of the informed and colorful portrait he draws of Washington’s corporate sleight-of-hand and lobbying. “You never see a lit cigarette, or anyone smoking in this movie. It’s more about the hysteria surrounding cigarettes,” he says.

Casting the lead character of Naylor posed an important step in the pre-production process. Producer David O. Sacks says, “He [the character of Nick Naylor] had to be handsome and all-American, while at the same time capable of delivering morally questionable arguments with a smile that made you love him.” Realizing the vital importance of the character himself, Reitman wanted to emphasize the “humane” aspects of Naylor’s character, not to simply portray him as a corrupt, greedy, womanizing, lobbyist.

Naylor’s humane side emerges in the emotional connection he establishes and maintains with his son, played by Cameron Bright. Buckley shares, “He [Reitman] did wonderful things to make it a great movie, the whole thing with his son. He created that. That’s not in the book.” Eckhart’s interpretation and instant identification with the character of Naylor made him a favorite for the casting team and he understood the importance of combining “spin” with some paternal elements. “That creates an instant bond; you’re somehow on his side,” Buckley continues.

The entire cast and crew visualized the motion picture as being about the corrosive effects of spin, lobbying and the intermingling of politics and money, not about smoking or cigarettes. Neither Buckley, William H. Macy, Rob Lowe nor Reitman smoke, and they all shared the central belief that the film hinged on a believable, humane, but greedy Naylor, someone who had a winning attitude and charm who could, somehow, make you love him.

Indeed, Buckley spent two years as President Bush Senior’s speechwriter, in the process observing insider politics, power struggles and the overarching importance of corporate lobbies and their influence. “Tobacco, alcohol and firearms are the unholy trinity,” he shares.

Capturing the clash between governmental authority, filtering the truth, rhetorical duplicity and the consequences these have were the key themes of Buckley’s novel and Reitman’s screenplay and directing approach; tobacco and the cigarette industry were the context of this exploration.

Thank You for Smoking is currently in theaters.
Article posted on 3/21/2006
This article has been viewed 2379 times.