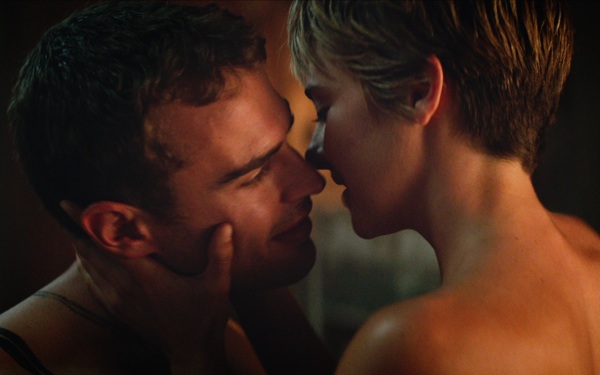 The next dystopian, post-apocalyptic movie is almost here, and the trailer promises lots of gun fighting, action and even a little sex.

In the new trailer for Insurgent from the Divergent series, Tris (Shailene Woodley) and Four (Theo James) are living in Chicago's outskirts. Erudite leader Jeanine (Kate Winslet) is hunting the fugitive lovebirds, and the two are searching to figure out why she wants Divergents. All of this running away and fighting the evil powers that be certainly leads to more bonding time for Tris and Four, though. The trailer gives us a glimpse of a love scene that's not exactly Fifty Shades of Grey spicy, but it's still pretty hot.

Near the end of the trailer, we find that Jeanine does end up capturing Tris, but she won't fight her. Instead, Tris will face her scariest opponent yet: herself.

Blog
Listen to a Special Curated Playlist from "Roadrunner: A Film About Anthony Bourdain"
972 views

Blog
What happened behind the scenes of Quentin Tarantino's Vista Theatre deal? The owner explains
377 views

Blog
Arena Cinelounge is serving up Popcorn that will leave you "Moonstruck!"
621 views