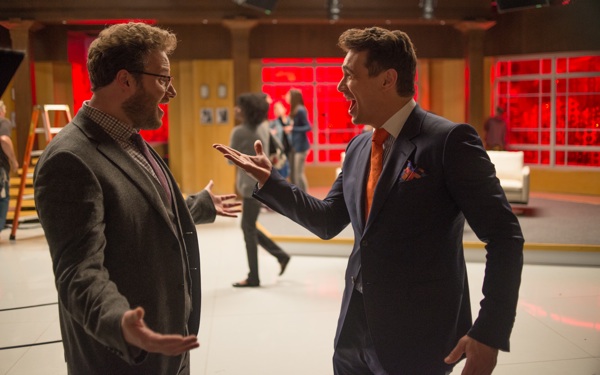 The controversy that The Interview caused up until now has also created a considerable amount of hype. Sadly, this hype might have been the fim's downfall. Although it satisfies one’s expectations, The Interview does not exceed them. There are times when the movie leaves the realm of the humorously absurd and falls into outright uncomfortable territory.

In the film, Dave Skylark (James Franco) is the host of a laughable tabloid show, and his most compelling stories are about Rob Lowe’s fake hair or Eminem coming out as homosexual. Aaron Rapaport (Seth Rogen), on the other hand, wants to start reporting actual news. So when it is revealed that Kim Jong-un’s (Randall Park) favorite show is “Skylark Tonight,” the two seek out to do an exclusive interview with the infamous North Korean leader. However, when the CIA quickly gets involved, they convince Skylark to “take out” the leader instead.

The Interview starts out hopeful, with a cute little North Korean girl singing about how happy it would make her if all American scum were to die horrible deaths. But then the film teeters in and out of actual humor and forceful humor. It also becomes heavily reliant on stereotypes. For example, the North Koreans' weird Korean/English accents are so unlike other stereotypical Asian accents that it is off-putting and cringeworthy. While there are comedic moments that are reminiscent of the 2013 hit This Is The End, some of the jokes go too far.

The legitimate humor comes from the one-liners you would expect from Rogen and Franco, rather than the overarching ideas that they play up about North Korea. Skylark is also another redeeming factor because he is so hilariously dumb that he believes almost anything. Unfortunately, his stupidity ends up being overdone by the end of the film.

Surprisingly, Kim Jong-un and the North Koreans are humanized, at least for part of the film (of course it comes at the expense of being offensive). In fact, it was Jong-Un and Sook (Diana Bang) who were consistently funny. Since there were no expectations attached to them, unlike with Skylark and Rapaport, their actions were constantly surprising. Had it not been for Park and Bang, The Interview would have ended up being a culturally insensitive and awkward movie.

Make no mistake—this film is worth watching if you enjoy Rogen and Franco’s controversial selves. It’s exactly what you’d expect from the obnoxiously comical ragtag duo, and The Interview does have its funny moments.

But don’t go into the film with high expectations. Like many movies with a lot of hype and a widely popular trailer, this one falls flat. The absurdity grows until the actors’ antics end in an unbelievable spectacle. And although this might have been their intention, the conclusion is very unsatisfying.

The Interview releases in theaters on Christmas Day (Thursday, Dec. 25), 2014.