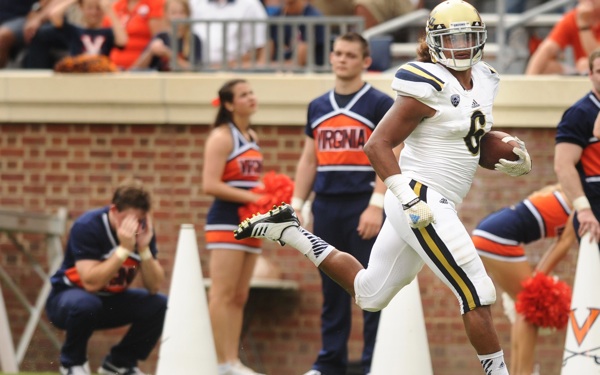 Last Tuesday, Eric Kendricks took a knee at Spaulding Field next to his UCLA teammates, unaware that a football legend stood just beyond the gates.

Hall of Famer Dick Butkus was there with his eponymous award, given each year for the past three decades to the top college linebacker. When Kendricks realized what was happening, - and soon, into tears of joy.

Bruins’ defensive back Anthony Jefferson said it proved “that work doesn’t go unnoticed.” Defensive coordinator Jeff Ulbrich called it “one of the most special moments that I’ve had on the grass.” Offensive lineman Scott Quessenberry told head coach Jim Mora it was one he’ll never forget.

But Kendricks had to give up that trophy, at least momentarily. The next day, five-star recruit Malik Jefferson - rated the top outside linebacker in 2015 - posted a picture of the Butkus Award. It had turned into a recruiting tool.

“We’ve used it,” Mora said. “It was on the plane with us for a couple of days. Eric, we took it right out of his hands and put it on a plane.”

Anything to sustain UCLA’s growing pipeline.

This past spring, consensus All-American Anthony Barr became the No. 9 overall pick in the NFL draft, the highest selection of any Bruin since 1996. This fall, Kendricks emerged from his shadow and took a turn anchoring the defense, becoming UCLA’s all-time leading tackler and its first-ever Butkus winner. On Sunday night, he joined Barr as a winner of the Lott IMPACT Trophy.

Next year, the defense will lean hard on Myles Jack, who followed up his two-way Pac-12 Freshman of the Year honors with an all-conference second-team spot. It will also have current freshman Kenny Young, who backed up Kendricks in the nickel formation and started next to him in the 3-4 base.

Suddenly, the Bruins’ claim on “Linebacker U” seems less silly. Eighteen months ago, UCLA tweeted that message next to a picture of Ulbrich, partially as a play on his last initial but also to market his success as a linebackers coach.

That created a bit of a kerfuffle at Penn State, which felt the need to stand up for its own history of linebackers. The Nittany Lions tweeted out their own message, and eventually Ulbrich posted his own Facebook spiel defending his players.

“Somebody said it,” Ulbrich said of the “Linebacker U” mantra. “I don’t know who said it. It was something that was kind of private, amongst (the players) themselves. I don’t know how it went public. Then the fans started blasting the players. So as a coach, that was my opportunity to stand up for them. ...

“What they take pride in is the here and now. A lot of people try to cling to tradition, they cling to the past, they cling to what was. Our guys are trying to start something now. Today. And they’re doing it. They’re making an argument for that.”

This season, the Bruins were faced with the unenviable task of replacing Barr, something that showed when they mustered four sacks through their first four games. Last week, Ulbrich was asked how difficult it would be to move forward without Kendricks - who led UCLA in tackles every game and also grabbed three interceptions.

“That’s awesome,” Ulbrich responded. “That means we’re doing something right, when you say, ‘It’s going to be so difficult to replace a guy.’ It hopefully means we developed a guy. Made a guy special, or helped him become special. It should be that way every year.