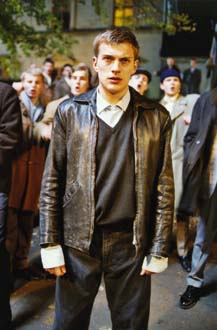 As the title to a film, the word “evil” certainly warns of something very heavy and brutal. And indeed, the warning is certainly justified in this Swedish-language film that explores the dynamics of human cruelty.

Set against the backdrop of an elite Swedish boarding school in the 1950s, Evil follows the journey of a bright high school student, Erik Ponti (Andreas Wilson), as he struggles to conquer his troubled past and to embrace his chance at a fresh start at his new school. The private all-male institution appears civilized from its exterior, but Erik quickly discovers that its interior is ruled by lawlessness and savage quests for domination.

Based on the book of the same name by famed Swedish writer Jan Guillou, Evil mines the depths of human behavior in a manner evocative of the classic fiction Lord of the Flies. In its own right, Evil is easily provoking. The stark contrast between Erik’s noble intentions and the meaningless actions of his power-driven adversaries heatedly charges every frame of the film.

The school comes to represent an extension of the emotional torment that haunted his household. It’s difficult not to be agitated by Erik’s suffering. It’s even more difficult to not be bothered by his adversaries’ malicious attempts to break him down. Although Erik is informed that the oppressive ploys executed by the senior students are both normal and tolerated, his own experiences with emotional abuse leads him to resist until the very end.

The film makes no excuses for the varying degrees of behaviors that unfold. There are no grand lessons learned and there are no justifications; only character examples that manifest the inexplicability of human nature. Erik loses friends and loves along his path of resistance, but his harsh encounters do, apparently, reinforce his values. His commitment to his self represents the very subtle theme of victory amidst the grander theme of social disorder.

Evil was an Academy Award nominee for Best Foreign Language Film in 2004. Since then, director Mikael Hafstrom has gone on to direct such American films as 2005’s Derailed, and Andreas Wilson has collected various awards and acclaim for his role in this atypical film. The work is atypical not only in its study of social behavior, but to a more passive extent in its ability to question our interpretations of morality and order.