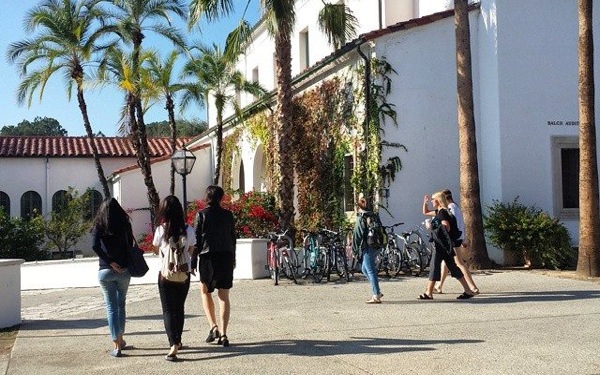 At a women's college, gender should be the easiest qualification for entry.

That's no longer the case. Women's colleges across the country are reconsidering their admission policies to adapt to a changing world in which gender norms are being challenged and more transgender students are seeking to enroll. It's a complicated calculus for many colleges, prompting concerns that these new considerations could affect the nature of single-gender schools.

Pressured by proactive student groups, some of the nation's 40-plus women's colleges are debating enrollment changes but also how to accommodate students who identify as men, such linguistics questions as the use of feminine pronouns, and whether school mission statements should be rewritten.

Mills College in Oakland last summer became the first in the nation to adopt a written policy on admitting transgender students, setting off a wave of self-examinations at many colleges. The latest to deal with the issue was Scripps College in Claremont.

Trustees there approved a new policy this month to admit applicants identified as female on their birth certificates. The school also will admit those who self-identify as women, which could include those born male who identify as female. The policy is effective for students applying for fall 2016.

College officials said the changes mostly reflect current practice and that the campus has graduated transgender students in the past, including some who transitioned while in school. Scripps, they insist, still will be a women's college.

"Colleges and universities have always led the way in policy discussions about social justice and expanding access," said Scripps President Lori Bettison-Varga. "It's not a surprise that students who we charge with thinking critically about institutions in general would be having these conversations at women's colleges right now. We're laying the foundation for a broader discussion about what it means to be a women's college in the 21st century."

Many alumnae agree but are troubled by the implications.

In a letter to the trustees, more than 100 alumnae raised several concerns, chiefly that these changes are part of a "systematic erasure of the female identity from women's colleges."

"Trans students argue that gender neutral language should be used to encompass their presence," the letter said. "But are we not, by erasing feminized language from our documents and rhetoric, erasing the female identities from a women's college? What could be more ironic?"

Many current students sought a stronger policy. A petition presented to the board in October and signed by more than half of the 1,000 students urged trustees to include applicants who don't identify as either male or female, regardless of the gender they were assigned at birth.

Frumkin acknowledged the disconnect for many as to how a women's college can remain true to its mission while admitting students who identify as men. Is it still a sisterhood if brothers are included?

But the evolution has already been underway, she said. The student association changed its bylaws four years ago to adopt language that's gender inclusive — referring, for example, to Scripps "students" rather than Scripps "women. " Most bathrooms are gender neutral, and male students from other Claremont campuses have long been a presence in Scripps classrooms.

At other prominent women's colleges such as Smith and Wellesley, both in Massachusetts, the application and supporting materials, including transcripts and letters of recommendation, must identify the applicant as a woman. Both colleges recently announced the formation of advisory groups to study evolving gender issues and make recommendations to trustees.

Mount Holyoke, in South Hadley, Mass., the first of the Seven Sisters women's colleges, in September adopted a formal policy to welcome transgender students, including those whose gender identity is not clear.

Her campus, she said, is sensitive to those with philosophical or religious differences. She pointed to a case of a Muslim whose request to change dorms was accommodated after her roommate transitioned to a man.

"We want to make clear that if people feel uncomfortable, there are ways to address these issues," Pasquerella said.

Women's colleges began as a counter to a patriarchal social structure that excluded women from higher education. In the 1960s, these campuses became symbols of women's empowerment, graduating future judges, senators, business tycoons and astronauts.

The threat, argue some critics, is that the presence of trans men — and their potential to adopt the trappings of male privilege — may once again relegate the voices of women to the back of the classroom. Trans men have taken leadership roles at women's colleges, including the current student body president at Mills.

The alumnae coalition at Scripps unsuccessfully asked trustees to allow more time for those opposed to make their case. The group had advocated a more restrictive policy to admit only students who identify as female at the time of application.

"For many alumnae, the approval of the new admissions policy at Scripps is not just disappointing. It is heartbreaking," said Kelsey Phipps, a Washington, D.C. attorney and advocate in the LGBTQ community who graduated from Scripps in 2001. "With its decision to admit male-identified students, many alumnae who believe deeply in women's education feel abandoned by the college.... In the end, no argument, logic or passion could derail that hurtling train. We were steamrolled."

Some transgender students, meanwhile, say that adopting a more inclusive policy won't necessarily change attitudes. Eli Erlick is a trans woman enrolled at Pitzer College but attends most of her classes at Scripps because of her major in feminist, gender and sexuality studies. Attitudes toward transgender students at the women's campus are not always welcoming, said Erlick, a national transgender advocate.

"I'm very leery that a policy change is being used as a representation of actual change," Erlick, 19, said. "The atmosphere on campus is still very focused on gendered people, on women assigned female at birth. Change is still going to require a lot of education."

Adriana di Bartolo, director of the Queer Resource Center of the Claremont Colleges, said a big part of education is demystifying the language around gender identity and understanding that transgender students have a variety of experiences, and even appearances. The center provided training for Scripps trustees and faculty.

"What is amazing about the students at Scripps is that they're ready for this change, ready to have a more inclusive policy and to welcome new folks on campus," Di Bartolo said. "People are afraid of a title wave of trans students going to Scripps, and that's just not going to happen. But women's colleges are absolutely leading the way."