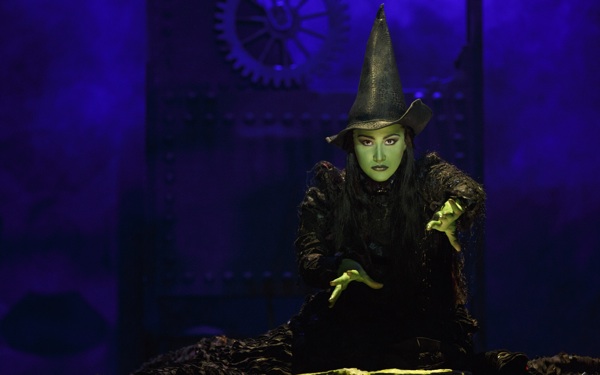 Broadway musical extravaganza “Wicked” has landed smack dab at the Pantages Theatre in Hollywood (don’t worry, no Wicked Witch was injured upon its arrival) and promises to be a theatrical favorite this holiday season. This was proven during its opening night on Thursday when audience members whooped and hollered throughout the performance, giving the two leading characters a well-deserved standing ovation.

I’ve seen The Wizard of Oz numerous times, but I’m not familiar with Wicked the book or “Wicked” the play. I do, however, know the popular number “Defying Gravity” (thank you, “Glee”) and that this musical is supposed to be one of the best Broadway shows out there. After all, if gave us Idina Menzel, who gave us Elsa, who gave us “Let it Go.” Hype surrounds “Wicked,” and as a first-timer, I was expecting “the works.” Although I got most of them, I was a little disappointed here and there after certain numbers. Perhaps my expectations were too high or the cast was experiencing opening-night jitters, but “Wicked” wasn’t wickedly fantastic—it was simply wicked good.

The storyline goes as follows: Glinda the Good Witch arrives on her bubble to let all of Oz know the Wicked Witch of the West is dead, thanks to a farm girl who had a bucket of water. Yes, she’s referring to Dorothy. “Wicked” begins after The Wizard of Oz ends. However, we go back in time as Glinda tells the story about how she became friends with the Wicked Witch, whose name is actually Elphaba.

We see the emerald-skinned schoolgirl with mysterious powers deal with being ostracized and rejected by her peers. Thankfully, she finds a friend in Glinda while at school, and after putting aside their differences, they develop a strong bond. Thanks to Elphaba’s magical powers, she earns a trip for the two of them to see the “wonderful Wizard of Oz,” which has always been her dream. Sadly, the wizard isn’t as wonderful as she thought, and then we get the true story about how the Wicked Witch ended up becoming, well, wicked. And along the way, we’re treated with funny one-liners that reference The Wizard of Oz, as well as behind-the-scenes explanations for what really happened when Dorothy visited the faraway land.

From start to finish, actress Chandra Lee Schwartz delivers a strong performance with her portrayal of Glinda. With way too many silly hair flips and high-pitch giggles, Schwartz gives Glinda a quirkiness that is annoying yet endearing at the same time. It’s impossible to hold in the laughs during her solo of “Popular,” and in addition to her bubbly personality, Schwartz’s voice is crystal clear and powerful.

Thursday's Elphaba, the standby actress for Emma Hunton, lacked that same consistency. Emmy Raver-Lampman wasn't the shining star that I expected her be—that is, until the second act. Don’t get me wrong, she pulls off the notes and holds her own. And, she is funny as hell while portraying Elfie as a schoolgirl. Still, I was not sure she could pull off each song, and I held my breath as she sang the long and high notes of “Defying Gravity.” This is perhaps the most iconic song from “Wicked,” but sadly it fell a little flat that night. Even when Raver-Lampman ascended into the air, it was just short of awe-inspiring.

But speaking of that wow-moment of Elphaba rising into the sky, that ascendance could not be done without an incredible set and special effects. In every scene, the set design and costumes are magnificent. The bright colors, dazzling lights and glittering designs transport the audience to a festive Candyland. More times than once I caught myself staring at the intricate designs on Glinda’s dresses, wishing I could snag some of them for my own personal closet….

Anyways, after Act I and a 15-minute intermission, Act II finally began. This is when the cast gave it all they had, especially Raver-Lampman. Many would consider “Defying Gravity” the show-stopping number, but for this reviewer, it is “No Good Deed.” Raver-Lampman delivers the song with such rage and emotion, belting out each note with indestructible force, her voice never wavering or faltering. When “No Good Deed” ended, I had to fight the urge to keep my butt glued to the seat and not give this woman a standing ovation.

The holiday season brings a heaping variety of theatrical productions throughout Los Angeles—you will be disappointed if you miss out on “Wicked.” Just before you go, lower your expectations. Schwartz and Raver-Lampman (and I'm assuming Hunton as well) are no Kristin Chenoweth or Idina Menzel. However, they hold their own, add a bit of originality to their respective parts and make this a memorable musical for all ages.