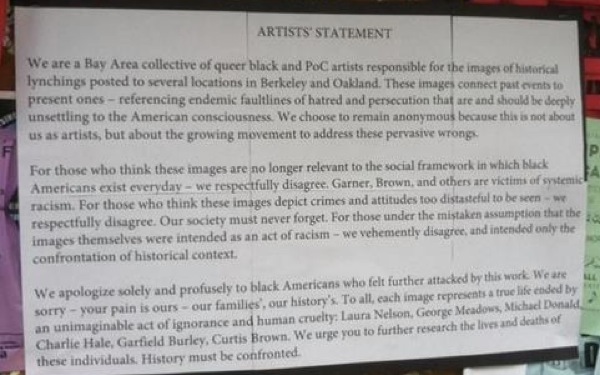 An anonymous Bay Area group is taking credit for the racially-charged effigies hung from nooses at UC Berkeley this weekend, saying they were meant to be provocative art pieces.

“For those who think these images depict crimes and attitudes too distasteful to be seen — we respectfully disagree. Our society must never forget,” said a typed, three-paragraph statement.

Pablo Gonzalez, a visiting research fellow at the university, said he was given the claim of responsibility by a student who found the message tacked to a bulletin board.

On Saturday morning, students reported three enlarged photos of lynched African Americans hanging from the university’s Sather Gate and from a tree near campus. The figures were quickly removed.

The effigies were hung on a day of nationwide demonstrations against police brutality toward people of color. The protests were a response to grand juries declining to indict police officers who killed unarmed black men in Missouri and New York.

UC officials called the effigies “deeply disturbing” and pledged to create a campus free of intimidation while still being open to the exchange of ideas.

The group claiming responsibility, in the statement, described itself as a “collective of queer and POC (people of color) artists responsible for the images of historical lynchings posted to several locations in Berkeley and Oakland.”

In the message, the group said it sought to bring historical context to recent controversy over the deaths of Michael Brown in Ferguson, Mo., and Eric Garner in Staten Island, N.Y. The group apologized to black people who were offended by its work.

The group said it was choosing to remain anonymous because “this is not about us as artists.”

Gonzalez, who tweeted the group’s message Sunday, did not immediately return a phone call and e-mail.