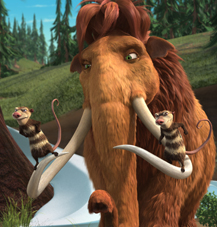 Whether you’re a man or woman, boy or girl, more than likely there’s a special place reserved in your heart for animated feature films. Disney blazed the trail early on with colorful features like Sleeping Beauty and Lady and the Tramp, and the digital age of recent years has brought us incredible – and meaningful – films like Toy Story and Monsters, Inc.

With the soon-to-be-released Ice Age: The Meltdown as inspiration (the film releases in theaters March 29), contained below is an insider’s preview of a handful of upcoming animated releases. So, sit back, relax and get ready to enjoy this family friendly art form through the end of summer.

Queen Latifah Brings Fun-Loving Personality to the Cast of Meltdown

At the end of the 2002 film Ice Age, which turned out to be both a commercial and critical hit, three completely different characters – Manny the Woolly Mammoth (Ray Romano), Sid the Sloth (John Leguizamo) and Diego the Sabretooth Tiger (Denis Leary) – united, despite their differences, to form a family.

In the film’s sequel, titled The Meltdown, the inseparable trio – who, in the new film, must deal with a melting world and the realization that they must escape the valley in which they live before it is flooded – is joined by a brand new voice: The edgy personality of Queen Latifah, who joins the cast as Ellie; a woolly mammoth with identity issues.

“Ellie is just the sweetest, lovable lump that you’ve ever seen. But she’s … well … she’s a little strange. A little aloof. And a little confused about her identity,” says Latifah, who makes her animated film debut with Meltdown. “You see, Ellie thinks she’s a possum. But she’s really a woolly mammoth. That’s real confusion!”

In the film, Latifah’s Ellie is provided as a potential love interest for Romano’s Manny, who, previous to finding Ellie, thought he was the last woolly mammoth on Earth. According to the film’s director, Carlos Saldanha, casting the role of Ellie proved a bit of a challenge. “We had to consider how she would sound opposite Ray Romano,” he says. “In addition, we wanted someone with a voice that had strength, independence, empathy and humor. Queen Latifah embodied all these qualities.”

While animating a female woolly mammoth provided a new challenge to the filmmakers – who gave the character a more “feminine quality” by adding rounder shapes, less bulk, a fun hairstyle and reddish hair – Latifah says that her background in hip hop actually helped her when it came to voicing the character.

“I think one of the reasons I enjoyed working on this film was because of the innate vocal rhythm I have as a musician. You catch things off that rhythm and you hear things a bit differently,” she says. “So it was interesting for me to get Ellie’s vocal inflections and make sure they worked for the character.”

All in all, Latifah – who also joins newcomers Seann William Scott and Josh Peck (who voice her possum “brothers”) for Meltdown – had a great time working on the project. Her voice can be heard, and personality experienced, when Meltdown hits theaters March 29.

In Over the Hedge, which bears slight visual resemblance to last year’s animated Madagascar, a hesitant turtle named Verne (voiced by Garry Shandling) begins to show alarm when he realizes that a big, green “thing” (or, the titular hedge) has sprouted up in the middle of his and his extended family’s home during their winter nap.

While he wants to keep himself and his friends (including Best in Show alums Catherine O’Hara and Eugene Levy as porcupine couple Penny and Lou; and 40-Year-Old Virgin Steve Carell as hyperactive squirrel Hammy) safe, Verne is constantly hounded by a mischievous raccoon named RJ (voiced by Bruce Willis).

RJ is forever trying to convince Verne and his friends that life “over the hedge” – a suburban utopia with lots of food to be had – is definitely worth a little bit of exploration. The animated feature also features the voices of Thomas Haden Church, Avril Lavigne, Nick Nolte, William Shatner and Wanda Sykes.

From the celebrated animation house Pixar – which brought audiences sheer animated joy with films like The Incredibles, Monsters, Inc. and Finding Nemo – comes Cars, a cute, fast-paced, moral-driven film set amidst the world of – hence the title – cars. The film follows the daily life of Lightning McQueen (voiced by Wedding Crashers’ Owen Wilson), a hot-shot hotrod who’s on his way to the Piston Cup Championship in California to compete against a couple of professionals.

Along the way, though, McQueen takes a detour through the sleepy Route 66 town of Radiator Springs, where he comes in contact with a handful of different, yet likeable, personalities. These include a sassy 2002 Porsche named Sally (voiced by Bonnie Hunt); a 1951 Hudson Hornet, named Doc Hudson, with a shady past and lots of stories (voiced by Paul Newman); and a rusty tow truck named Mater (voiced by recent comedy sensation Larry the Cable Guy).

And, as promised (after all, it is a Disney film) there is a moral to the fast-paced animated feature: While in Radiator Springs, McQueen learns that there are more important things in life than just fleeting fame and sparkling trophies.

GARFIELD’S A TALE OF TWO KITTIES

This time, however, Garfield follows his owner, Jon (Meyer) on a trip to England. The antics begin when Garfield – a chronic troublemaker – is mistaken for a look-alike regal cat who has recently inherited a castle. Needles to say, Garfield is loving every bit of the regal treatment he’s receiving. That is, until he realizes that his new lifestyle is being put in danger by the evil Lord Dargis (Billy Connolly), who wants to get rid of Garfield and turn the beautiful castle into a resort.

Starring a handful of talented celebrity voices – including Steve Buscemi, Maggie Gyllenhaal, Jon Heder, Catherine O’Hara and Kathleen Turner – Monster House is a frighteningly fun tale about a group of kids who believe their neighbor’s house is haunted.

Since nobody believes the fact that the house is actually a monster that lives to eat trick-or-treaters on Halloween, the kids decide that it’s up to them to save their neighborhood from the titular haunted home.

In this moral-filled animated tale, an unlucky 10-year-old boy named Lucas Nickle just can’t catch a break. His parents are too preoccupied to notice him; his grandmother is too kooky to care; his sister, Tiffany, has nothing but harsh words for him; and, to top it all off, he’s constantly picked on by the school bullies.

Lucas’ only release, then, is stomping ant hills in his front yard and burning their many inhabitants with his magnifying glass. That is, however, until the Wizard Ant Zoc (voiced by Nicolas Cage) invents a potion that, when squirted in Lucas’ ear, shrinks him down to ant size and enables the six-legged bugs to bring him into their underground colony to be placed on trial.