All Bets are Off in Mark Wahlberg’s The Gambler 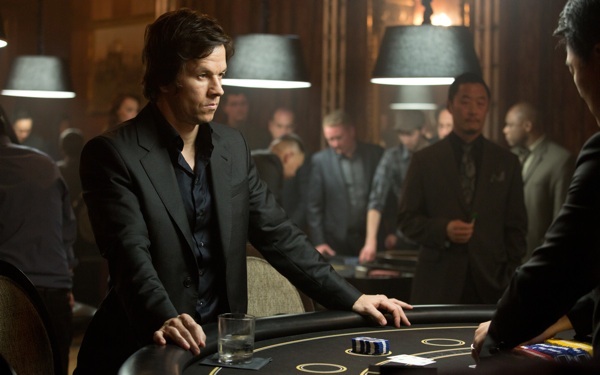 Maybe you’re thinking what I was thinking before I saw The Gambler: This film is about some guy who gambles a lot, loses the money and then has to pay it back to some dangerous men. Well, if you’re like me, then you're right on the money. And unfortunately, you don’t get to cash in on this bet.

The Gambler is everything you think it is, which makes it an unabashedly predictable and rather hopeless film right out the gate, when really, it had no reason to be.

Mark Wahlberg is Jim Bennett, an English professor with a gambling problem. He gives up his money to the wrong people and simply does it way too often for it to be interesting. After that, he doesn’t do too much but lose more money, fall for one of his prodigy students—played by the usually enrapturing Brie Larson (21 Jump Street)—and use his estranged millionaire mother for her money, all the while pissing more and more gangsters off and caring less and less about it.

On paper, The Gambler is doing things deliciously right. Its director is Rupert Wyatt, whose Rise of the Planet of the Apes (2011) was a finger-in-face provocative adaptation. The cast is filled with the likes of Wahlberg (Boogie Nights), John Goodman (The Big Lebowski) and Jessica Lange (“American Horror Story”). Writer William Monahan taught us that films can spontaneously combust with unpredictable magic in The Departed, and the solemn yet romantic cinematographer Greig Fraser illuminated the striking worlds of Foxcatcher and Zero Dark Thirty, just to name a few.

But even with an impressive team behind it, The Gambler managed to go against its own odds and fall into a ditch of puzzling complacency. As a remake of the 1974 film by Karel Reisz, a foundation was already laid. However, this remake took its own path and sadly, it was the wrong one.

With that said, everything about The Gambler is not discountable, for a few of those big-hitters mentioned earlier pulled through with their side of the bargain. Fraser fills much of the screen with the same soft, melancholic imagery that has made him an iconic cinematographer of today’s movies. The many gangster pads and hideouts are a highlight of Wyatt’s world of sin, simultaneously rich with color and grit. Veterans Goodman and Lange rightly command attention as usual, but that’s little surprise.

What may be the major cause of The Gambler’s lack of purpose is its inability to commit to intent. Monahan’s script is wildly heavy with Wahlberg’s monologues about what it is to be a genius and what purpose that title gives someone. Jim (Wahlberg) disregards any validity he may have in teaching, and that sense of degradation becomes a main theme, making the film seem as if it’s crying out for help.

Jim is an apathetic protagonist, unwilling to give a hoot about any of the consequences or threats that come his way. If he doesn’t care what happens to him, then why should we? His indifference permeates to us, the viewers, as we watch our hero—more out of obligation than anything—scramble to get the dough together.