Home-Schooled, She Graduates from High School, College at the Same Time 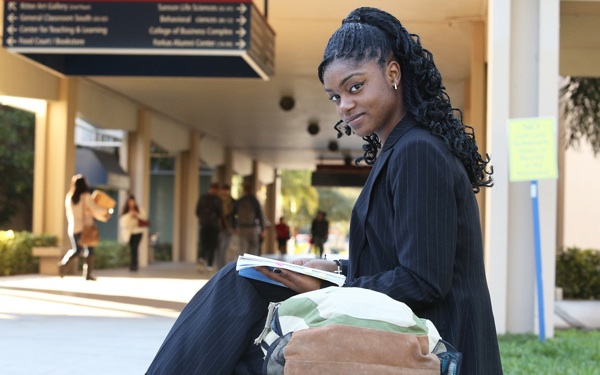 Joanna, 17, is about to graduate from college, several months before she graudated from high school.
(Credit: Carline Jean/Sun Sentinel/TNS)

When Joan Martin took on the task of homeschooling her four children, she was forced to learn algebra, biology and other subjects that many of us have long since forgotten.

“I was clueless at first,” she said.

But she joined homeschooling groups, obtained curriculum guides and apparently did a pretty good job. Her daughter Joanna graduated recently from Florida Atlantic University — at the age of 17.

Joanna, who grew up in Miramar, Fla., joined more than 2,460 FAU students who were scheduled to receive their degrees at the university’s main campus in Boca Raton.

Her path to an early college degree ran through FAU High School, where students take most of their classes at the university. Homeschooled through ninth grade, she won admittance to the high school in a competitive process in which applicants are judged on grades, standardized tests, letters of recommendation and an interview.

The high school’s 433 students typically take a year of high school classes and three years of college classes. But Joanna supplemented these with summer classes and obtained enough credits to earn a bachelor’s degree in English at the same time she obtained her high school diploma.

A handful of students at FAU High School each year obtain a college degree at the same time or within a semester or so of graduating from high school.

“It’s a very small percentage,” said Tammy Ferguson, the high school’s director. “We don’t push it. It’s very hard to do that in four years.”

As you’d expect from someone who has excelled academically, Joanna has a wide range of interests and career plans — from Jewish studies, to music to writing.

“We were raised Christian but my mother incorporated Jewish studies; I learned Hebrew,” said Joanna.

As a young violin student, she was given tickets to hear the legendary Israeli-American violinist Itzhak Perlman and came away captivated by his performance of the theme from the movie Schindler’s List. She saw the movie and other films about the Holocaust, such as The Boy in the Striped Pajamas.

“It was like I wasn’t watching a movie about someone else,” she said. “It was like it was about my family. It just tugged at my heart.”

She plans to pursue a master’s degree in Jewish Studies and a doctorate in ethnomusicology. She has applied to graduate school at Princeton, Brandeis, Rutgers, the University of Pennsylvania and several other schools. But she has also loved writing since she was a small child, and she hopes to teach it one day.

“I want to be a teacher who teaches students to learn to love writing the way I came to love it and be better prepared for college,” she said. “Even if you’re a science major, you’re going to have to write papers. I feel it’s important that students learn to write properly early on.”

“Ethnomusicology comes from being violinist,” she said. “I want to see the impact that music has on the mind of a child or an adolescent and how it affects them negatively or positively.”

Thomas Martin, associate professor of English who is not related to the family, said Joanna shows vast enthusiasm for learning.

“She brings a wonderful sense of discovery and endless curiosity to every new subject,” he said. “Her commitment to excellence and love of learning are infectious to everyone around her. She obviously will go far in her life.”

Her older brother, James, also graduated early from FAU, earning a degree in molecular biology last year at the age of 17. He is now at Princeton.

Her mother said was happy with the results of homeschooling her children.

“It wasn’t easy,” she said. “But I’m grateful God guided me through the process and we made it together.”