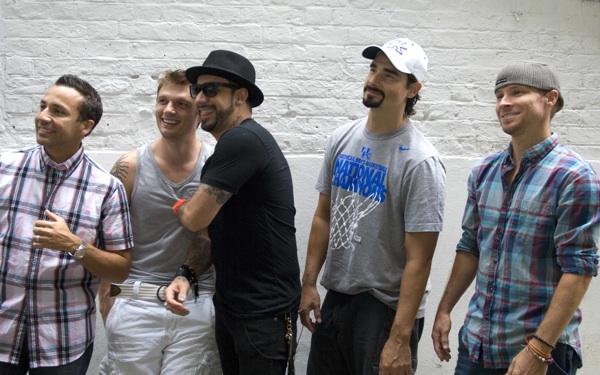 From the early 1990s to the early 2000s, pop boy band the Backstreet Boys were on top of the world. As every girl who grew up during this time knows, the pop music industry was over-saturated with boy bands, such as 98 Degrees, Hanson and O-Town. But in all honesty, there were only two bands that achieved global super-stardom: 'N Sync and the Backstreet Boys.

Unlike the popular boy bands that young tween girls scream for today, such as One Direction and Five Seconds of Summer, these guys performed high-energy choreography as they sang their pretty little faces off in front of packed arenas around the world for years. But when these "boys" became "men" and their fans grew up as well, the boy-band craze died down.

In the trailer for the Backstreet Boy's upcoming documentary Show 'Em What You're Made Of, band member Brian Littrell says, "From 1992 to 2002 we were the biggest band in the world. No one thought it was going to be as big as it was." He goes on to say, "Then it just stopped. And what do you do when you're a full grown man in a boy band?"

This documentary follows the five buds on their journey and experiences with fame, fortune, betrayal and renewal. With boy bands making a strong comeback in recent years, Show 'Em What You're Made Of will most likely provide great context and insight on what the music industry was like back then and how much it has changed now.

And we will also get the band's thoughts on Lou Pearlman, the disgraced yet formally celebrated man who launched the Backstreet Boys' and 'N Sync's careers before he was sentenced to prison for 25 years in 2008 for conspiracy, money laundering and more.