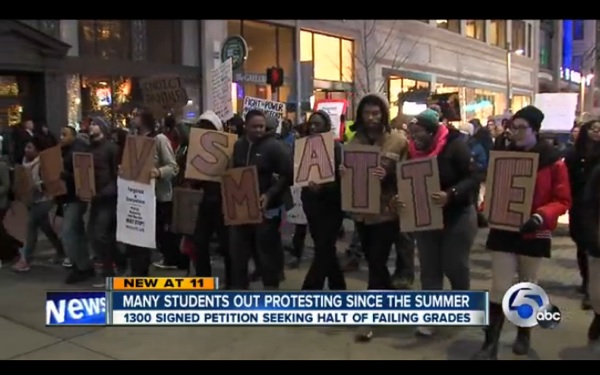 Following the fatal police shootings of Mike Brown and Tamar Rice as well as the police-involved death of Eric Garner, thousands of college students across the country have been protesting police brutality and racism. And hundreds of students at Oberlin College in Ohio are learning a tough (and arguably unfair) lesson about life and sacrifice: If you miss class, even to protest a cause worth fighting for, you risk receiving failing grades.

According to the Oberlin Review, more than 1,300 students signed a petition to get the standard grading system suspended and have the administration institute a "no-fail mercy period." Basically, the students wanted to receive nothing lower than a "C" for skipping class or not studying while they protested.

As predicted, the administration did not comply with the students' demands.

"We are in firm agreement that suspending grading protocols is not the way to achieve our shared goal of ensuring that students have every opportunity and resource to succeed," wrote the college's president, Marvin Krislov, in an email to students.

One Oberlin student told News Net 5, "Imagine if you had to tell your grandkids, ‘I didn’t go out and fight for what is right because I had to go finish a chemistry final.'"

These students won't be catching a break, but at least they won't face disciplinary action for protesting, unlike some Boston College students. Twenty-one students at the Massachusetts university participated in a die-in on campus Tuesday. Because they didn't have a permit, they could receive sanctions. But first, they have been summoned to Dean Richard DeCapua's office for "Conversational Resolutions."

DeCapua told Boston.com, "A traditional sanction would be a suspension or probation. An educational referral would be something like writing a paper or doing research on a topic—a lot of times educational referrals are for issues related to alcohol. A formative sanction is specific to Boston College because of the Jesuit mission program; it’s where a student is assigned to talk to other students and staff members to increase dialogue surrounding an issue."

People will argue back and forth about the students at these two schools and whether or not the administration acted fairly. But the one thing we've learned about these stories: Life isn't always fair.

Campus News
California State campuses with most COVID-19 cases have one thing in common – they like to party
1,648 views