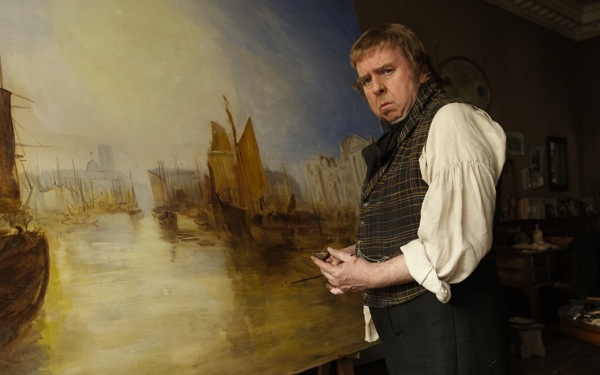 At the beginning of the 18th century, a gaggle of British artists schooled the galleries of the world with their landscapes full of varied lines, shapes and fluidity. One of them, a squat, rather unpleasant looking man with a taste for sherry, saw the sea as the pinnacle of unimaginable possibility and beauty.

J.M.W. Turner (Timothy Spall, Harry Potter) scoffed at theory and denied acute praise, as he was indeterminably unsatisfied with the way art, even his own art, aimed to whittle down the world to one frame. Though he was surrounded by arrays of love, most notably his sickly father William (Paul Jesson) and a wake of disgruntled exes and offspring he left behind, Turner’s inspiration was the mere distraction that nature brings—a never-faltering, never-waning distraction.

For director Mike Leigh, who has graced us with all of the über British glory in Secrets & Lies and Another Year, Mr. Turner marks a major turn in his career as the scope, the period and bite all have made a drastic step beyond what we have grown to expect from him. The film is still just as British, if not more (some may argue for subtitles). Leigh’s past work has grappled with the intricacies of interpersonal relationships on a small, rather isolated scale, but Mr. Turner turns even more inward as the director explores the value of an artist.

The world at large watches and expects to love Turner. When they ultimately don’t, as the artist begins to obscure lines and embrace nature’s emotion rather than its shapes, they are truly the more disappointed ones, for he is simply a reactor to the evolving landscapes around him. Indeed, we see the artist battling the qualms of love, but it comes in a different form. Perhaps, to acquaint it with his artwork, Leigh discovers Turner’s interpretation of love as unattainable as the shape of the sea.

It would be perilous to go on without putting the spotlight on Spall, the man who brought a nasty sweetness to Leigh’s Turner. There are few actors out there right now who possess a face so brimming with earnest expression. Even when it comes in its most ghastly forms, such as the sometimes-overwhelming grunts that escape his unmistakable mouth, it’s a mistake to tear one’s eyes from it; you may miss a wink, a sneer or a quivering jowl that completes a scene so poignantly.

While this period piece may be somewhat long-winded, much like its titular character, do not hold fear of a stuffy, aristocratic tea party with mere pretty pictures interspersed here and there. Since this is Mike Leigh we are talking about, you can rest assured that his characters are filled with quirky, light and comedic buoyancy, never taking themselves too seriously. Even the ones that do, most notably a hilariously pretentious wannabe art critic, are quickly made fun of and cast aside as ridiculous.

Seeing as this is a story about one of Britain’s most prolific landscape artists, there is no void of strikingly gorgeous imagery to accompany the traipsing of Mr. Turner. Cinematography by Dick Pope, who brought us the otherworldly light of The Illusionist (2006), treats us to appropriately canvas-like scenery that validates Mr. Turner’s obsession and deeply entrenched need to capture all that is out there.

For when he looks out on the seascape, he may see the dark histories that transpired over the currents; he may see the new technologies full of steam and steel that now aim to traverse the waters; or he may simply see the sun cast out on the ocean as a god, as if to beckon Mr. Turner for worship. And worship he did.

Enter to win a Mr. Turner poster by clicking here!