What, is it 1995 Again? ISINA Academy Unveiled at Holiday Party 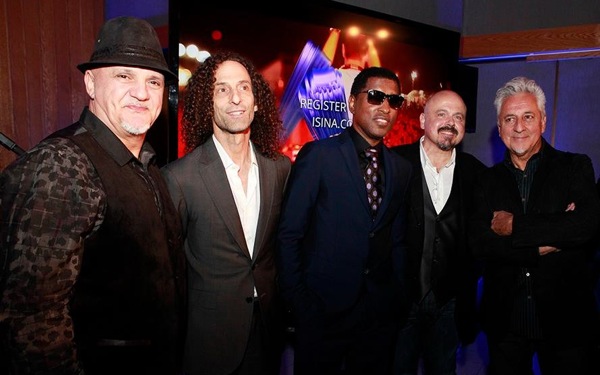 I think that’s what most people were asking on their way to the Capitol Records building in Hollywood Wednesday night: Sure, this is probably going to be a great holiday party, but what is ISINA?

ISINA’s founder, Walter Afanasieff, said, “ISINA is the Individual Style Institute of North America.” For Afanasieff, it's is a legacy project, an academy that offers a six-week, all-expenses-paid course for undiscovered musicians. Musicians chosen by ISINA will train with experts in their individual discipline.

And who exactly is Walter Afanasieff? He’s a long-time producer for Mariah Carey and is essentially the guy you have to thank for the ringing you get in your ears every holiday season; he rote “All I Want for Christmas is You,” which coincidentally is celebrating its 20th year.

Of the song, Afanasieff said, “When I see what it’s done in 20 years, I’ve become very proud and protective of it. I regard it as being a very big milestone in at least my career, I know Mariah’s career…and I’m very, very thankful for that.”

While working the red carpet, Campus Circle also had a chance to catch up with Kenny G, the ‘90s jazz sensation whose name is relatively synonymous with a time period where Zima Light and Pure Moods commercials ruled the airspace on the USA network. In addition to working with ISINA as a ‘professor’ for instrumentalists, Kenny G is in the process of releasing a new album this January. The new album, titled Brazilian Nights, is all Bossa Nova, which Kenny claims is perfect music for studying at the end of the day.

When asked about tracks from his upcoming album that might work well for a DJ to remix, he said, “They can take any track and remix it; I don’t care. But Bossa Nova by itself is awesome—the rhythm is awesome.”

For any budding DJs that might be looking for a good track to throw in their next mix, Kenny also said a track called “Bossa Real,” a Kenny G original, might work for what you’re doing.

The ‘90s celebrities aside, the real highlight of the night was a performance by one of ISINA’s first students, an obscure vocalist named Laura Melody. For those of you who have not heard of her, be advised—this girl is gonna be huge! With more talent than we’ve seen from any upcoming vocalist in quite some time, Melody crushed it in front of an audience of industry influencers at Capitol Records Studios.

You can’t say enough about the control, humility and power that Melody exudes when she performs. She went through two songs that evening, an original and a cover of Carey’s “All I Want for Christmas…” to the delight of Afanasieff and just about every other person in the room. Melody’s version of the song can go head-to-head with Carey’s–better or worse is too subjective, so we won’t go there.

But the bottom line is, be on the lookout for Melody and any other musician that comes out of ISINA. Who cares if the academy is staffed with artists and producers whose heyday ended nearly two decades ago? These cats are bringing in talent, and it will be very interesting to see what other artists ISINA gets its hands on in 2015.

Special Features
Wolfgang Van Halen on his Whisky a Go Go 'homecoming,' a year after his father's death
952 views

Special Features
These are the songs of summer 2021: A playlist for your easy, breezy season
538 views
bid=||