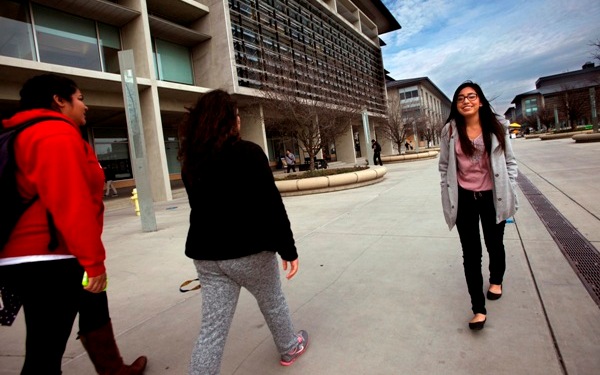 Sophomore Aimme Ruiz is one of the beneficiaries of the UC Referral Guarantee.
(Credit: Genaro Molina/Los Angeles Times/TNS)

LOS ANGELES — Aimee Ruiz was panicked. The four University of California campuses she applied to had rejected her. Two private colleges had accepted her but not offered enough financial aid. She considered taking a year off school to work and save money.

Then UC Merced emailed to see if she wanted to enroll in its freshman class even though she had not sought admission there. “I was so happy, I remember dancing in my room. I had a future,” the La Puente resident said.

The offer, known as referral, is a tenet of the University of California — a guarantee that students who meet the system’s basic academic eligibility requirements but do not get into their preferred schools will have a place to go.

But few students take advantage of it. Only about 2 percent of the high school seniors who were offered the referral to Merced last year decided to enroll.

The low number of students who accept the offer — currently available only from Merced — are leading some critics to suggest that it’s time to end the program.

Because many students prefer private schools or California State University campuses over an unsolicited invitation from UC Merced, the guarantee of admission to UC for the highest-performing seniors has little meaning, said William G. Tierney, co-director of USC’s Pullias Center for Higher Education. While “a great talking point,” it is not valued by many families and does not help ease enrollment pressures facing public higher education, he said.

Supporters, however, note that the guarantee reflects an implicit promise in the state’s 1960 Higher Education Master Plan to provide a spot somewhere in the system for the top 12.5 percent of California high school graduates. They say the referrals are more important than ever since admission now is so selective at the more highly ranked UC campuses such as Berkeley and UCLA, and it can be futile to rely on their waiting lists.

Backers also argue that the referral program sets a numerically clear achievement goal for high school students, while other admissions decisions take into account less specific variables such as extra-curricular activities and personal challenges. It also provides a sense of UC as a unified, tax-supported system that will not abandon good and deserving students if they miscalculated in their college applications.

“Students have a sense of what they need to do to secure a spot at the University of California,” said Michael Trevino, the system’s director of undergraduate admissions. “It is predictability that if you do well … you will receive a guarantee somewhere in the UC system.”

In previous years, more of the system’s nine undergraduate campuses had enough space to offer referrals to qualified students turned down by other UC campuses. UC Santa Cruz, for example, participated in the program until 2002 and UC Riverside until 2010. The Merced campus, which opened in 2005, is the sole safety valve.

After being denied entrance last year at the UC campuses to which they had applied, about 11,200 students still were eligible for the system. They all were offered Merced. Only about 210 enrolled there, UC data show. (That came in addition to the 1,620 or so Merced freshman who applied and entered in the more traditional method. UC’s newest campus now has 6,300 students in total.)

Encarnacion Ruiz, the campus’s director of admissions and outreach, said the referral system, which his campus calls “Count Me In,” is important to maintain, even if the numbers are small.

Ruiz said most applicants reject the offer because they already are committed to other colleges. “We try to be very respectful of their situation. I know we weren’t their first choice, but we tell them: ‘Here is an opportunity and we would love for you to consider it.’”

Those who enroll often find they enjoy being on a relatively small campus that provides more direct contact with faculty, he said.

Aimee Ruiz — now a sophomore psychology major (and no relation to the admissions director) — said she remains grateful for the offer two years ago. The Merced campus is less intimidating than bigger schools, she said, and makes it easier to enroll in classes. As for the rural setting: “It might be a little boring for some people, but it’s a great place to focus on your education.”

Sage Alossi, 22, a recent Merced graduate who was admitted there after other UC campuses denied her, said she got an excellent education.

“To get a second chance at UC is a pretty big deal,” said Alossi, a human biology major.

Students are eligible for the enrollment guarantee if they meet one of two criteria:

They must have a high school grade point average of at least 3.0 in a prescribed set of college preparatory classes and be in the top 9 percent of their graduating class.

Or they must be in the top 9 percent of all high school seniors statewide, based on an index that pairs grade point averages with SAT or ACT test scores; the higher the GPA, the lower the required test score.

That index turned out to be too lenient and was qualifying too many students in recent years, according to George Johnson, a UC Berkeley professor who formerly headed the committee overseeing university-wide admissions standards.

Trevino said the score increase is not dramatic. “It simply tightens things a little bit,” he said.

But, she said, most students and parents do not like the location, bemoan Merced’s lack of varsity level intercollegiate sports and already have their hearts set on other schools, including public universities in other states.

While the option is not popular, she said she hopes UC keeps the enrollment guarantee.

“It meets the commitment of the state and the university to taxpayers and to all the kids in high school,” said Murphy, who is a former president of the National Association for College Admission Counseling. “It promises you that if your child has over a 3.0, there is a place for them. Whether they want to go there is another issue.”