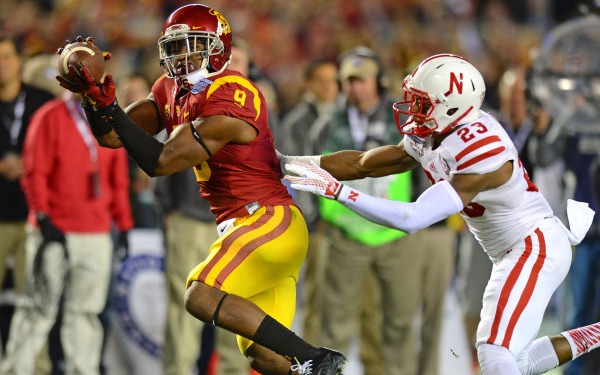 SAN DIEGO — It wasn’t over until Nelson Agholor knocked down a Hail Mary pass.

On Saturday night in the Holiday Bowl against Nebraska, USC once again made it far too interesting.

Just as they had done in numerous games this season, the Trojans were in position to put away an opponent and appeared as if they would not get it done.

But after USC’s 11-point fourth-quarter lead had shrunk to three, Agholor batted away the last-second Hail Mary to preserve the Trojans’ 45-42 victory at Qualcomm Stadium.

“That wasn’t new to us,” USC senior safety Gerald Bowman said, referring to the Trojans’ penchant for late-game dramatics this season, in both wins and losses.

USC actually thought it had won moments earlier, when Nebraska’s Kenny Bell was driven out of bounds at the Cornhuskers 44-yard line after catching a pass and time expired.

But after a replay review, referees put one second back on the clock, giving Nebraska a final shot. Tommy Armstrong Jr.’s long pass was knocked down by Agholor at the sideline, just inside the USC 10-yard line.

Sarkisian said before the game that the outcome would not “say who we’re going to be next fall.”

But this much is clear: The Trojans need to find ways to close games better. And Sarkisian needs to find even more ways to involve freshman Adoree’ Jackson.

Jackson’s 98-yard kickoff return in the first quarter gave the Trojans a 7-3 lead. His 71-yard touchdown reception put the Trojans ahead by 14 points early in the third quarter.

USC needed both plays to get past a Nebraska team that went into the game with a question regarding its motivation.

Former coach Bo Pelini was fired after the regular-season finale and Mike Riley was hired to replace him.

It was left to interim Coach Barney Cotton to rally the Cornhuskers, just as USC offensive coordinator Clay Helton did last season for the Trojans in the Las Vegas Bowl.

Nebraska never quit, but could not overcome the Trojans.

In what might have been their final game for USC, several draft-eligible players made a mark.

Williams drew penalties on consecutive plays in the first quarter, but looked every bit the projected top-five pick in the 2015 NFL draft and was named defensive player of the game.

Kessler completed 23 of 39 passes for 321 yards, with one interception, and was named offensive player of the game.

And Agholor caught seven passes for 90 yards and a touchdown.

USC overcame its lack of discipline to forge a 24-17 halftime lead on Jackson’s kickoff return, an Andre Heidari field goal, a touchdown catch by Agholor and a short touchdown run by Allen.

Jackson put the Trojans ahead 31-17 by taking a short pass from Kessler and turning into a spectacular 71-yard touchdown.

But the Cornhuskers were not deflated.

Quarterback Tommy Armstrong led Nebraska on a seven-play drive that Ameer Abdullah finished with a 20-yard touchdown run, pulling the Cornhuskers to within 31-24.

Nebraska blocked a punt with 5:46 left, but USC stopped the Cornhuskers inside the 10-yard line forcing them to settle for a field goal.

Kessler appeared to put the game out of reach when he connected with JuJu Smith for a long gain and then found tight end Bryce Dixon for a touchdown that put the Trojans ahead, 45-27.

But Nebraska answered with a 65-yard touchdown pass from Armstrong to Jordan Westerkamp, cutting the lead to 11 points.

The Cornhuskers weren’t through.

With about seven minutes left, Armstrong ran for a 15-yard touchdown and then pulled the Cornhuskers to within three points with a two-point conversion pass.

But Nebraska got one more chance.