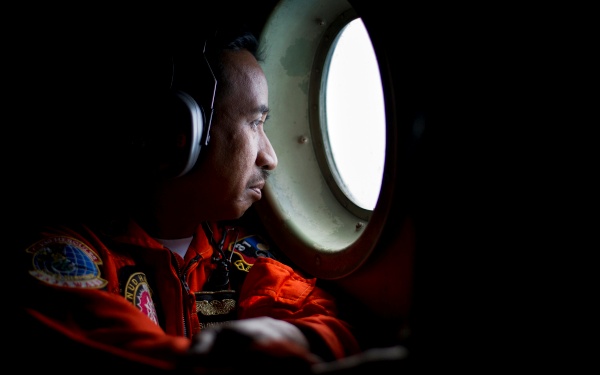 MUMBAI, India — Investigators resumed an urgent, rain-dampened hunt for a missing plane in the waters of Southeast Asia early Monday as search officials said the jetliner carrying 162 people was probably “at the bottom of the sea.”

The head of Indonesia’s National Search and Rescue Agency said during a news conference that Indonesia AirAsia Flight 8501 — which lost contact with air-traffic controllers Sunday morning after encountering rough weather during a two-hour flight to Singapore — probably crashed into stormy waters in the Java Sea, “based on the coordinates given to us.”

“That’s the preliminary suspicion and it can develop based on the evaluation of the result of our search,” news agencies quoted the agency chief, Bambang Soelistyo, as saying.

In a disaster that stirred memories of two ill-fated Malaysian flights this year, Indonesian, Malaysian and Singaporean ships and aircraft were focusing their search off the east coast of Belitung — an island in the 250-mile-wide channel between Sumatra and Borneo — but grappling with monsoon rains and thunderstorms. Belitung lies roughly halfway between Singapore and the aircraft’s point of origin, Surabaya, Indonesia’s second-largest city.

“God willing, we can find it soon,” 1st Adm. Sigit Setiayana, the naval aviation center commander at the Surabaya air force base, told The Associated Press.

Setiayana said Monday that 12 navy ships, five planes, three helicopters and several other ships had joined the effort, according to the AP. No wreckage had been found when the search was temporarily halted as evening fell Sunday, 12 hours after the plane lost contact with the ground, as teams faced low visibility because of difficult weather conditions.

Among the 155 mostly Indonesian passengers were 17 children and one infant, according to an updated statement from AirAsia. The plane was also carrying two pilots, four cabin crew members and an engineer, airline officials said.

Anguished relatives gathered in Surabaya and Singapore’s Changi international airport to await word on their loved ones — a grim replay of the Malaysia Airlines disasters this year in which one commercial aircraft disappeared en route to Beijing and another was shot down months later over war-torn eastern Ukraine.

This aircraft, too, was connected to Malaysia, which is the headquarters of AirAsia, a low-cost carrier that operates mainly short-haul flights across Southeast Asia and boasts of its 25-minute turnaround time between flights. AirAsia’s Indonesia affiliate has the country’s best safety record, regional aviation experts said.

The airline said the aircraft took off from Surabaya at 5:35 a.m. and was on its scheduled flight path but had requested to deviate “due to en route weather.”

The Indonesian Transport Ministry said the last communication from the Airbus A320-200 jetliner came at 6:12 a.m., when the pilot asked permission to turn left and climb to an altitude of 38,000 feet to avoid clouds.

According to multiple reports, the request to change altitude was denied because of other aircraft in the area.

“Air traffic control granted the request to deviate to the left side, but refused the request to fly higher because of air traffic,” Indonesia’s acting director general of transportation, Djoko Murjatmodjo, told the Jakarta Post.

Six minutes later, the flight disappeared from radar, according to a timeline the ministry posted on Twitter. Murjatmodjo said there was no distress signal from the cockpit.

To assist Indonesian search-and-rescue teams, Malaysia’s transport minister said he had dispatched three ships and one aircraft, while Singapore sent a C-130 cargo plane to join the effort. Early Monday, Australia said it deployed an Orion surveillance aircraft to assist.

A Pentagon spokeswoman, Maureen Schumann, said the U.S. military was prepared to assist in the investigation or recovery operation but had not been asked to do so as of late Sunday.

Southeast Asia, including parts of Indonesia, has been struck by unusually heavy monsoon rains this month that have caused severe flooding and forced nearly 160,000 people to evacuate their homes in Malaysia and Thailand.

Satellite images from Sunday morning showed heavy storms north of Surabaya that “were capable of producing severe turbulence, strong wind shear, frequent lightning and icing,” according to an AccuWeather.com meteorologist. But aviation experts say it would be unusual for a lightning strike or severe turbulence to damage a modern commercial aircraft.

“It’s very rare that a plane gets damaged or loses control because of weather these days,” said Gerry Soejatman, an aviation consultant in Jakarta. “If that’s what happened, I doubt the explanation will be that simple. There will have to be a number of factors at play.”

Soejatman cited a picture circulating in online forums of an air-traffic control screen showing the AirAsia flight traveling at an altitude of 36,300 feet — and climbing — but with a ground speed of only 353 knots, well below normal. That would indicate that the pilot did not heed air traffic controllers’ instructions not to change altitude, perhaps because he thought the aircraft was in danger, Soejatman said.

The same image shows a nearby Emirates Airline jet traveling at 36,000 feet at a speed of 503 knots. Ground speed is different from air speed, which can be affected by elements such as wind, but Soejatman said investigators would be looking into why the AirAsia plane’s speed dropped.

“For the other plane to be flying at 150 knots faster ground speed at that altitude, there is a strong indication that the Airbus speed was low, but we need to look into that further,” he said.

There was also a discrepancy involving the time Flight 8501 disappeared. Indonesian authorities told reporters the plane lost contact with the ground at 6:17 a.m. Sunday, but statements by AirAsia on its Facebook page said that occurred later, at 7:24 a.m.

Airbus, the aircraft’s French manufacturer, said in a statement that the twin-engine, single-aisle jet had accumulated approximately 23,000 flight hours in 13,600 flights. The aircraft was delivered to AirAsia from the Airbus production line in October 2008, the company said.

The A320-200 is the only model the airline operates. AirAsia said in a statement that the captain had amassed 6,100 flying hours and the first officer had 2,275 flying hours. The plane had last undergone scheduled maintenance on Nov. 16.

“Our main priority is keeping the families of our passengers and colleagues informed on the latest developments,” Sunu Widyatmoko, chief executive of Indonesia AirAsia, said in a statement. “We will do everything possible to support them as the investigation continues and we have already mobilized a support team to help take care of their immediate needs, including accommodation and travel arrangements.”

One family member, identified as Erna W., told the Indonesian news agency Antara that she had four relatives on board.

“I hope I can get information soon on the whereabouts of our family members,” she said through tears, the news agency reported.

The passengers also included three people from South Korea and one each from Malaysia, Singapore and Britain, the airline said. (Initially, AirAsia said a French citizen was aboard but later retracted that.)

“We’re devastated by what’s happened,” a somber AirAsia Chief Executive Tony Fernandes said during a news conference in Surabaya. “It’s unbelievable. But we don’t know what happened yet, so we wait for the accident investigation.

“Our concern right now is for the relatives and for the next of kin,” Fernandes said. “There is nothing more important to us, for our crew’s family and for the passengers’ families.”

Fernandes, a colorful former Time Warner executive who counts British tycoon Richard Branson as a mentor, purchased the ailing, deeply indebted carrier from the Malaysian government in 2001 for 1 ringgit, or about 25 cents. He is credited with turning it into one of the world’s most successful budget airlines and breaking the monopoly of its state-owned rival, Malaysia Airlines.

Experts said there was a greater likelihood of search teams finding this aircraft than the still-missing Malaysia Airlines Flight 370, which vanished in March with 239 people aboard while flying from Kuala Lumpur, Malaysia, to Beijing. The search for that plane continues off the coast of Australia in deeper and more wide-open waters.

In the second accident this year involving Malaysia Airlines, Flight 17 was shot down over eastern Ukraine in July en route from Amsterdam to Kuala Lumpur, killing all 298 passengers and crew. Ukrainian and U.S. intelligence officials believe Russia-backed Ukrainian separatists were to blame.

President Barack Obama, who was vacationing with his family in Hawaii, was briefed on the missing flight, said White House spokesman Eric Schultz.

(Staff writers Matt Pearce in Los Angeles and David Willman in Washington contributed to this report.)