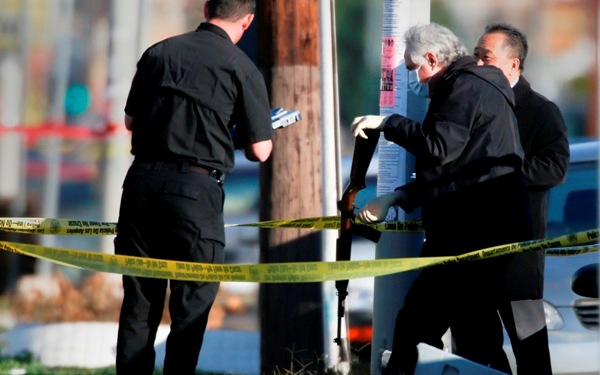 LOS ANGELES — The search for a second shooter in an attack on Los Angeles police was called off early Monday, and red and yellow caution tape barred entrance to the scene of the shooting.

“We don’t know what precipitated the shooting,” LAPD Lt. Andy Neiman told the Los Angeles Times, but “everyone’s keenly aware of what happened in New York,” and there is a “sense of uneasiness.”

Sunday night around 9:20 p.m., two officers in a single patrol car were responding to a call and driving southbound on Hoover Street near 62nd Place. They saw a muzzle flash — the visible blast from a gun — and determined they were being fired at, Neiman said.

Despite the surprise attack, neither officer was hurt and they were able to return fire, officials said.

Police called a citywide tactical alert and launched a massive search following what they described as an ambush. One person of interest was detained for questioning, but another man remained at large.

“It was an ambush,” Deputy Chief Bob Green said. “They were fired upon without any prior contact with the suspects.”

Neiman said: “It’s very clear that the officers were in a black and white police car. The people who shot at these officers knew they were the police.”

Around 8:30 a.m. Monday, one of the officers involved in the shooting showed multiple investigators around the crime scene. Investigators surveyed the east side of Hoover Street, where bullet casings from the gunman’s weapon lay, according to police. Minutes later, investigators huddled around a gutter on the west side of the street, where they removed a weapon that appeared to be a rifle.

The setting of the shooting is a South Los Angeles neighborhood with primarily single-family homes, a few churches and a nearby high school.

After Sunday night’s attack, a citywide tactical alert was called as police undertook a massive search. The incident came less than two weeks after two New York police officers were fatally shot in an ambush.

Neiman said one man had been detained as a person of interest, and police were still searching for at least one suspect. But SWAT and sheriff’s personnel were no longer actively involved in the search, he said.

“We do not have a face or a name; there are leads that investigators are following up on,” Det. Meghan Aguilar said Monday morning. “This is obviously a dangerous individual who does not belong on the streets of Los Angeles.”

Christopher Oliver, 50, said at the time of the shooting he was working on his cars in the back of his house on 62nd Place, just steps away from where investigators found shell casings early Monday.

He said all he heard was the shots — “and you know it ain’t fireworks.”

He immediately “locked up everything and got in the house.”

Officers arrived within minutes and blocked off the area. Oliver said his son had gone around the corner and was not allowed back to the house. “He had to spend the night at the neighbors,” Oliver said.

With the recent conflicts arising between police and protesters, Oliver said “it’s like New York making it to L.A. ... These guys out of no where want to shoot at police? If that ain’t copycat, these guys are trying to make a name for themselves.”

A three-block area around the shooting scene was immediately cordoned off after the attack as police scoured the area with search dogs.

Just before 11 p.m. LAPD advised residents to stay indoors. “Armed suspect in the area,” the police station said on Facebook. “Please keep our officers in your thoughts and prayers!”

A short stretch of Hoover Street near 62nd could remain closed to traffic on Monday until noon, according to police.