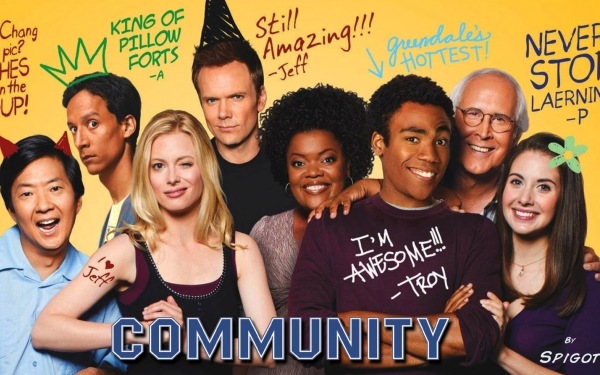 F. Scott Fitzgerald wrote that “there are no second acts in American lives.”

Well, increasingly, there are second acts for American TV shows.

Used to be that if your favorite series was canceled, it was all over but the reruns. Now fans of canceled programs can pray that one of the online streaming services — Netflix, Hulu, Amazon, Yahoo, YouTube, Crackle, and so forth — will step in with a reprieve.

The always-endangered cult comedy “Community” will have a sixth season beginning in the new year. But not on its ancestral home, NBC, where it was always treated as a minor annoyance. Instead, “Community,” with a slightly altered cast, will surface on Yahoo Screen, where it will be a very big deal indeed.

Similarly, “Longmire,” the contemporary western starring Robert Taylor, Katee Sackhoff, and Lou Diamond Phillips, will return for a fourth season on Netflix in 2015.

The show was canceled by A&E in August, despite being the most popular original drama the channel ever had. But because it attracted an older audience, A&E considered “Longmire” expendable.

But online outlets such as Netflix don’t have to worry about demographics or ratings. The only measurement that matters is the subscriber total. They get paid whether 25 people are watching or 25 million. So even a marginal program may be acquired if it has established a loyal fan base that might sign up just to see it.

Streaming services will even snap up slightly damaged goods. The sitcoms “Selfie” and “Manhattan Love Story” got quick hooks from ABC in the fall — so quick that many completed episodes never made it on air. Enter Hulu, which is letting the shows roll out in their entirety.

The unexpected resurrection of these programs has ignited wild hope among TV viewers that there may be a comeback for some of their old favorites. Several prematurely canceled network series have occasioned ardent fan campaigns for renewal, notably “Firefly,” “Veronica Mars,” “Jericho,” and “Freaks and Geeks” (although personally, I preferred Judd Apatow’s follow-up comedy, “Undeclared”).

But if cancellation is no longer final, that allows TV lovers to dream. Here are 10 shows I’d like to see get a second life:

“The Prisoner.” Patrick McGoohan, the man who should have been Bond, was Number 6 in this trippy if paranoid 1967 series about a secret agent held prisoner in a strange, seemingly sunny village. Leo McKern, who would go on to play Rumpole of the Bailey, was the sinister Number 2. The unsettling CBS show, limited to 17 episodes, was remade by AMC as an unsatisfying miniseries with Ian McKellen and Jim Caviezel in 2009.

“The Highwayman.” The great Sam Jones (“Flash Gordon”) was the title character, roaming a dusty, dystopian future in his tricked-out 18-wheeler. He took down bad guys with the help of his sidekick, the awesome Aussie Jetto, played by Mark “Jacko” Jackson, best known as the Energizer battery man. After a two-hour pilot (guest-starring Jimmy Smits, Wings Hauser, Rowdy Roddy Piper, and Lyle Alzado), the show survived only 8 installments on CBS in 1988.

“Dark Angel.” Created by James Cameron and Charles H. Eglee, this 2000 cyberpunk series starred Jessica Alba as Max, a bike messenger in a devastated Seattle in the year 2019. Max was the product of a nefarious genetic experiment that got her involved with the muckraking cyberjournalist Eyes Only (a very pre-“NCIS” Michael Weatherly). The richly atmospheric show lasted 42 episodes on Fox, but it should have gone on forever.

“On the Air.” This unhinged 1992 comedy was created by Mark Frost and David Lynch. Ian Buchanan (“General Hospital”) played a washed-up movie star and lush trying to make a comeback as the host of a variety show in the 1950s. As you might expect when the director (David L. Lander, Squiggy on Laverne & Shirley) speaks in an incomprehensible accent, everything goes riotously wrong. ABC gave it three episodes.

“Sports Night.” Aaron Sorkin’s first TV project (before “The West Wing”) was a magical combination of material, setting and cast (Josh Charles, Peter Krause, Felicity Huffman, Josh Malina, and Robert Guillaume). It was about the quippy anchors of a cable sports clip show (generally thought to be based on Keith Olbermann and Dan Patrick during their SportsCenter reign). It notched 45 episodes on ABC, starting in 1998.

“Wonderfalls.” This 2004 series, created by Bryan Fuller (“Pushing Daisies”) and Emmy-winner Todd Holland (“The Larry Sanders Show”), was a surreal delight. Caroline Dhavernas (now on another Fuller show, “Hannibal”) was delightful as a brainy souvenir-shop clerk in Niagara Falls. It was four and done on Fox.

“Rubicon.” This 2010 conspiracy series starred James Badge Dale as an analyst at a covert American intelligence service who finds himself embroiled in a ruthless government plot. Jessica Collins, Lauren Hodges, Miranda Richardson, Dallas Roberts, Christopher Evan Welch, and Arliss Howard co-starred in this smart and edgy show, which got 13 installments on AMC.

“Happy Endings.” This 2011 sitcom should have been the “Friends” of the new millennium. It was a brilliantly inventive comedy about an eclectic clique of pals in Chicago, powered by an acrobatic ensemble (Damon Wayans Jr., Eliza Coupe, Elisha Cuthbert, Zachary Knighton, Adam Pally, and Casey Wilson). It lasted longer than any other show on this list (57 episodes) on ABC, but that was far too few.

“Almost Human.” Karl Urban (“Dredd”) was a laconic Dirty Harry-type cop in the year 2048, a dark future with a surging crime rate. Michael Ealy (“Think Like a Man”) played his spunky android partner. This intriguing futuristic series was just hitting its stride when Fox unplugged it after 13 episodes.