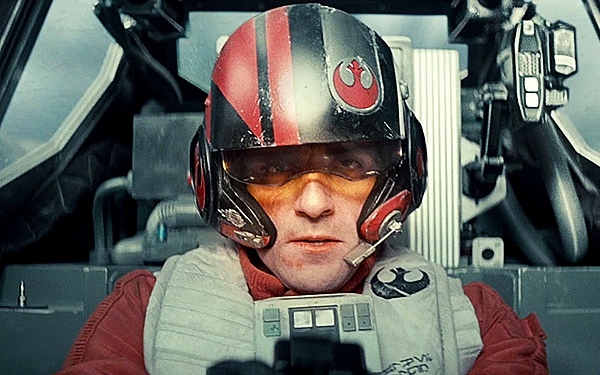 Chris Taylor headed to San Francisco’s AMC Metreon 15 on Black Friday for a 10 a.m. screening of “Fury,” but it wasn’t just the Brad Pitt tank drama that he’d come to see. Taylor was among the throngs of fans who made their way to 30 theaters across the country that day to be among the first to watch the trailer for “Star Wars: The Force Awakens,” which will return the legendary space opera to the big screen in 2015.

“There’s one guy in the theater in the back row already watching the trailer over and over again on his iPhone,” recalled Taylor, the author of the new book “How Star Wars Conquered the Universe.” Also, he said, “there were stormtroopers in the audience.”

Nor was the excitement confined to cinemas; online, the clip was reportedly viewed more than 20 million times within 24 hours, and Twitter quickly became consumed with reaction to the imagery, which paid homage to George Lucas’ original 1977 epic while also introducing new characters and locales.

“The cynicism and crap that comes along with being a fat, middle-aged man goes away in the face of this trailer,” noted filmmaker and default fan spokesman Kevin Smith in a video reaction to the clip, with its shots of alien landscapes, adorable droids and soaring X-wing fighters. “It took me back to that moment in my youth.”

If it seems unusual that an 88-second glimpse of a film that isn’t due for release until Dec. 18, 2015, could generate such intense interest, it is. But “Star Wars: The Force Awakens” isn’t the average Hollywood blockbuster — it’s easily one of the most anticipated movies of next year and possibly of the decade.

For a certain generation, “Star Wars” remains a singular touchstone. Lucas had intended to craft a contemporary “Flash Gordon,” but his movie’s reach extended well beyond mere entertainment. It helped shape core ideas about the transportive joy of cinema and rewrote the pop culture lexicon to include light sabers and Wookiees and jokes about making the Kessel Run in less than 12 parsecs.

It also gave rise to Hollywood’s modern-day love affair with multimillion-dollar popcorn movies targeted to younger viewers and skeins of sequels, not necessarily something to cheer for those who decry the demise of the studio-made adult drama.

“The original ‘Star Wars’ film meant so much to so many people,” Dergarabedian said. “The positive implications of that movie are almost incalculable — the impact it had on the culture, on box office, on how we perceive the sci-fi genre. There’s a lot of filmmakers today who say that the reason they started making movies was because of ‘Star Wars.’”

The franchise flourished throughout the decades thanks to follow-up films, a steady stream of toys and other merchandise that flooded the market, and animated series and novels set in the galaxy far, far away. All told, the seven “Star Wars” movies, including 2008’s animated “The Clone Wars,” have grossed $4.4 billion worldwide, making the series the third-most-successful in box-office history, second only to “Harry Potter” and James Bond.

Yet not all of the films have been as beloved as “Star Wars” and its two immediate sequels, 1980’s “The Empire Strikes Back” and 1983’s “Return of the Jedi.” A prequel trilogy launched in 1999 with “Star Wars: Episode I — The Phantom Menace” met with a mixed response even as the movies made billions at the box office. (A 2010 documentary, “The People Vs. George Lucas,” explored the often strained relationship between the filmmaker and his constituency.)

“The Force Awakens” represents a chance for a new beginning without the divisive creator, who sold his Lucasfilm empire to Disney in 2012 for about $4 billion. Set 30 years after the events of “Jedi,” the new film sees Mark Hamill, Carrie Fisher and Harrison Ford reprise their respective roles as Luke Skywalker, Princess Leia and charming rogue Han Solo, with other actors from the original trilogy including Anthony Daniels, Peter Mayhew, Kenny Baker and Warwick Davis also set to return.

Lupita Nyong’o, who earned an Oscar for supporting actress for her heart-wrenching turn in “12 Years a Slave,” and Gwendoline Christie, who plays the towering fighter Brienne of Tarth on HBO’s “Game of Thrones,” have roles in the film as well.

Director J.J. Abrams, one of that class of filmmakers who counts “Star Wars” as a critical influence, wrote the “Force Awakens” script with Lawrence Kasdan, whose credits include “The Empire Strikes Back,” “Raiders of the Lost Ark” and “Return of the Jedi.” The plot is being kept strictly under wraps.

Abrams — who made two “Star Trek” movies for Paramount before jumping on board “Star Wars” — recruited composer John Williams to return to the franchise he helped shape with his memorable scores. He has sought to recapture the feeling of the early movies in other ways such as shooting on film (rather than digital) and using physical puppets (instead of CGI) whenever possible.

“J.J. has very clearly signaled ... to the old fans that it’s safe to come back,” Taylor said.

Disney certainly has plans to keep the old fans coming back. “The Force Awakens” will be the first installment in a new trilogy; Rian Johnson (“Looper”) will write and direct the subsequent film, “Episode VIII,” and he is set to pen a treatment for “Episode IX.”

Meanwhile, “Chronicle” director Josh Trank and “Godzilla” director Gareth Edwards have been enlisted to direct two “Star Wars” stand-alone movies, which will explore the universe outside of the primary episodes of the franchise. Executives at Disney, which is also the corporate parent to comic-book movie powerhouse Marvel, have said that they expect to open a new “Star Wars” film annually for the foreseeable future, a plan that will no doubt contribute substantially to the company’s revenues in the coming years.

Dergarabedian is hardly alone in his assessment that “The Force Awakens” has all the makings of a smash hit, one that could possibly unseat Peter Jackson’s “The Hobbit: An Unexpected Journey,” which debuted with $84.6 million, as the highest-grossing December opening in box-office history.

“There’s not been a $100-million debut in December,” he said. “This could be the one to do it. I think people are going to be lining up around the block to see it.”

Taylor will be one of the people in line on opening day. He attributes part of the interest in “The Force Awakens” to simple nostalgia — movie lovers are longing to recapture the elusive quality Lucas described as “effervescent giddiness.”

But something greater is at work too: The longing to experience a truly universal adventure in a world apart from our own.

“I think the franchise has the potential to be a fairy tale for the ages in exactly the same way that something like Little Red Riding Hood is known to have survived for 300 years if not longer,” Taylor said. “I’m rooting for something that will continue the legend to the point where enough of us are on board that we have this global fairy tale and it becomes a lingua franca.”