College Football Competition Levels are Anything but Balanced; A Question and Answer 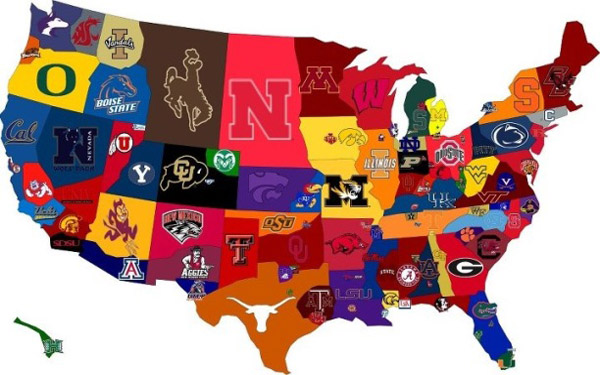 College football’s future is bright but also perplexing. The sport has grown exponentially since the Bowl Championship Series began in 1998. The BCS was a train wreck to some but propelled the sport to a national brand as it served as a creaky bridge to the present.

The major bowls no longer are obstacles to determining a national champion. In the new, four-team playoff, the major bowls are now semifinal portals to a last, Super Bowl-like, championship stop.

The playoff did not, as some feared, dilute what many people consider the best regular season in sports. Victories are still precious and defeats are near-death experiences. Two worthy one-loss teams, Baylor and Texas Christian, couldn’t make this season’s playoff cut.

What makes college football cutthroat and Darwinian also makes it precarious. The college game is unfair, or at least unbalanced. The NCAA is powerless to shore up the weakest schools against the strong. The five power conferences are getting richer at the expense of the poor. The construct is under duress. It is fundamentally flawed and broken, caught in the untenable relationship between amateurism and greed. The game is strong, but the premise is weak. Lawsuits continue to challenge the employer-worker relationship in which coaches can become multimillionaires on the backs of cheap labor.

The sport is fraught with paradoxes and contradictions. Public schools must compete with private schools on fields that are anything but even. Some players unite for the rah-rah love of their team. Others prefer unionization.

So it’s onward to 2015, with a few questions and answers, some heavier than others.

Question: What will happen to weaker football institutions?

Answer: Some will shut down. We’ve seen it already with the shuttering of football at Alabama Birmingham. If they can close operations in football-crazed Alabama, it can happen anywhere. Hawaii football is reportedly in trouble. The Power Five conferences have consolidated power at the expense of the weakest five. Baylor and TCU did not reach the playoff, in part because they played unworthy schedules. Schools competing for playoff spots are being discouraged from playing schools from the Mountain West, Mid-American, Conference USA, Sun Belt and American conferences.

Q: What happens in the playoff next year?

A: The College Football Playoff contract with ESPN is for 12 seasons. Six major bowls will rotate the semifinal games each year. This season, the Rose and Sugar Bowls will play host to semifinal games with the winners advancing to the Jan. 12 national title game in Texas.

Next season, the Cotton and Orange bowls play host to the semifinal games Dec. 31, with the championship game at University of Phoenix Stadium. The Rose Bowl will return to a traditional matchup between the Pac-12 and Big Ten conferences. It will not have to take a team from a different conference even if it loses one or more teams to the playoff. The Sugar Bowl, when not a semifinal, will play host to the Big 12 and Southeastern conferences champions.

Q: Will there be tweaks to the playoff selection process?

A: Maybe, but nothing like the annual adjustments we had in the 16-year history of the BCS. The four-team playoff format appears set. The 13 selection committee members are scheduled to be back. That includes Archie Manning, who had to withdraw this year to deal with a nagging knee injury.

There is some talk already the committee may not want to release its weekly ranking. While it adds interests, it can also compromise the committee’s integrity.

The panel took heat this year for dropping TCU from third to sixth on the final weekend after a 55-3 victory.

Don’t discount the influence of ESPN. The network funds the College Football Playoff and uses the weekly rankings to promote programming.

Q: Will there be an eight-team playoff soon?

A: Commissioners probably won’t cave on the four-team playoff for at least six years, if at all. Even though there was controversy this year, the general consensus is the committee picked the right four teams.

Pac-12 Commissioner Larry Scott said that going to eight teams could devalue the meaning of the regular season.

“I’d be surprised if it’s something that gets discussed within the next few years,” Scott said. “But I know there will be a lot of public pressure for it.”

Q: Can USC win the Pac-12 South and return to glory?

A: So long as Cody Kessler is the quarterback, the Trojans have chance to be solid in 2015. USC is finally emerging from the fog of NCAA probation and can start creeping back to the 85-man scholarship limit. Next year’s schedule is also favorable. USC plays a nonconference slate any SEC school would be proud of: Arkansas State and Idaho.

Oregon comes back on the Pac-12 schedule with the game at Eugene, but presumably quarterback Marcus Mariota will be in the NFL.

Q: Is there life at UCLA after Brett Hundley?

A: Hundley’s excellent college career is only tainted by the fact he couldn’t get UCLA past Oregon and Stanford. He did beat USC three times, which used to count for plenty.

Hundley’s departure clears a path for a heralded incoming freshman, Josh Rosen of St. John Bosco High. Rosen is considered the best quarterback prospect in the country. He is 6 feet 5 and a pinpoint passer. He’s not the runner Hundley is, so it will be interesting to see how coordinator Noel Mazzone tweaks the spread offense to take advantage of Rosen’s skills.

Hundley was UCLA’s best quarterback since Cade McNown and Rosen, if you believe the hype, has a chance to be better than Hundley.