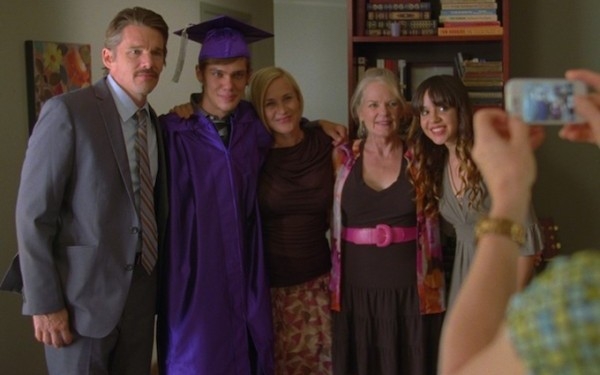 Nobody was waiting for Godard.

The National Society of Film Critics closed down the pundits’ phase of awards season this past weekend by giving its best picture prize to Jean-Luc Godard’s “Goodbye to Language,” catching many — including some of the group’s voters — by surprise. Most had expected Richard Linklater’s “Boyhood” to win, as it did with the Los Angeles Film Critics Assn. and the New York Film Critics Circle. And Linklater’s acclaimed movie nearly did win, coming one ballot shy in the National Society’s first round of voting for best picture.

But “Goodbye to Language” ultimately beat “Boyhood” by a point total of 25-24. By National Society rules, a movie not only must have the most votes but also must appear on a plurality of ballots. If that doesn’t happen, the group moves to a second round where proxy votes are discarded and only the members present can determine the winner. That reduces the pool to members who live in or around New York or, who through some misfortune, find themselves in the city in early January.

Of the group’s 59 members, 18 were present, 23 voted by proxy and 18 didn’t vote. That means 18 critics determined the winner, with about 10 thinking that Godard’s latest — an oblique critique of contemporary society (in 3-D!) that premiered at Cannes and finally will open in Los Angeles this month, was worthy of a win (three points), place (two points) or show (1 point) spot on their ballots.

Should the National Society change its voting rules to include more of its group?

“If we go to a second round [or more], the dynamic can shift radically — although it should be noted that it most often does not,” said member Sam Adams, who was present at the vote. “Almost all the categories went more than one round this year, and the results are still about what you’d expect.”

With the dust now settling, “Boyhood” tops all contenders with 12 best picture wins from critics groups, followed by “Birdman” with seven and “The Grand Budapest Hotel” with two. Although the tastes of critics and film academy members don’t always align (don’t look for the stark sci-fi film “Under the Skin” the morning Oscar nominations are announced), growing evidence suggests that Oscar voters pay attention to reviews and the buzz they generate.

The five best picture winners since the academy expanded the category in 2009 have all scored highly on the Metacritic and Rotten Tomatoes movie review aggregator sites. “12 Years a Slave,” “Argo,” “The Artist,” “The King’s Speech” and “The Hurt Locker” each scored in the mid-90s on Rotten Tomatoes and the mid-80s on Metacritic. Some critics may never forgive the academy for going with “The King’s Speech” over “The Social Network” in 2010, but you’d have to go back nearly a decade to “Crash” to find a best picture winner that left critics less than rapturous (though “Crash” had its share of champions too, including Roger Ebert).

If that history holds true, this year’s best picture winner will be “Boyhood,” “Selma,” “Birdman” or, less likely, indie favorites “Whiplash” or “Mr. Turner.” Wes Anderson’s “The Grand Budapest Hotel” skirts the edge of the conversation with a 92 Rotten Tomatoes score.

Needless to say, he doesn’t belong to the National Society.