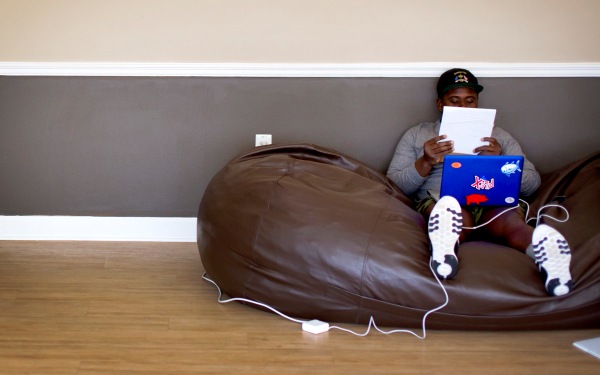 ORLANDO — Frederick LaLanne describes his mother as a helicopter parent who doesn’t seem to mind that the baby of the family lives at home while he commutes to college.

But it doesn’t keep her from echoing the common refrain at the end of the semester: When are you going to graduate?

For LaLanne, who expects to be 24 when he finishes University of Central Florida a year from now, the delay can be blamed on changing majors and juggling work.

“If I graduated a year or two ago, I’m guess(ing) I’m working. I might be in something I didn’t want to do,” LaLanne said on a recent day in the Student Union while soon-to-be graduates in their caps and gowns posed for pictures nearby.

LaLanne’s six-year journey is becoming normal on campuses across the country as most students fail to graduate within four years, according to a recently released study called “The Four-Year Myth” from an Indianapolis nonprofit Complete College America.

Only about 19 percent of college students will graduate in four years from public universities and about 36 percent from flagship high-level research institutions, the report said.

For those seeking an associate’s degree at a two-year school, only about 5 percent will finish on time, the study found.

“Metrics like these are unacceptable, especially when we consider that students and their families are trying desperately to control the skyrocketing costs of higher education,” the report said. “As lifetime savings are depleted and financial aid packages run out, the extra time on campus means even more debt, and for far too many students, additional semesters do not result in a degree or credential.”

At UCF, fewer than half of all students will graduate in four years.

For the group of UCF students who enrolled in the 2008-09 year, about 40 percent finished within four years while about 70 percent had earned diplomas by six years, according to the university.

The expectations of students graduating in four years has changed, especially as students study abroad or do internships, said Maribeth Ehasz, UCF’s vice president of Student Development and Enrollment Services

“Now students want to do more that extends their time,” Ehasz said, adding most UCF students typically finish school in 4-1/2 to five years.

Still, the latest numbers show improvements from nearly a decade ago as more students arrive on campus with college credits from dual enrolling or AP courses. Only 31 percent graduated in four years in the group that started UCF in 1999-2000.

About 16 percent of Valencia College students who didn’t need remedial classes graduated in two years while 37 percent finished in three years, according to the numbers for those who started at the school in 2010.

The latest report blamed several reasons, such as students not taking enough credits each semester while they juggle school, work and families to a problem with credits not transferring from other schools. The average graduate finishes with 134 credits, above the typical threshold of 120 to get a degree, the report said.

UCF pushes to help students narrow in on what they want to do, Ehasz said. First-year students are assigned special advisers at orientation to “get a grip on what’s in front of them” and meet throughout the school year.

LaLanne counts his credits at 98 so far.

Outside Orlando, at Winter Springs High School, LaLanne was known as outgoing teenager. His grades weren’t spectacular, but good enough to graduate, and he played practically every sport — lacrosse, volleyball, football, baseball.

In his family, LaLanne was special. He was going to be the first in his immediate family, who migrated from Haiti, to attend a university after he graduated high school in 2009.

“Then a year passes, and then I go, ‘I’m not really about this,’” LaLanne said.

Last spring, he settled on his major, falling back on his love of sports. He wants to study sports exercise science and dreams of becoming a strength and conditioning coach at a university.

It isn’t easy to catch up. He could cram more classes into his schedule, but he delivers pizza 25 hours a week and spends summers working at a camp to earn extra money. LaLanne is paying his way using loans and financial aid.

He doesn’t focus on the debt that lies ahead, he said.

“If you worry about it through your whole school career, that wouldn’t be good,” he said. “Every class would stress you out – I need to get it done.”