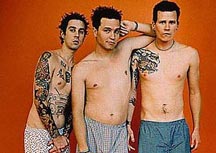 "When we first started out, we played at this bar, and every five minutes the owner of the bar came over and asked us to turn it down," begins blink-182’s singer and bassist Mark Hoppus, telling the story of the worst night blink experienced as a struggling local band in San Diego. "After playing like 15 minutes, he just said, ‘You know what? You guys should just stop. And here’s some Snapple — you guys earned them.’

"They just gave us some Snapples and sent us on our way," says Hoppus, looking back with a laugh. Although the story seems funny now, Hoppus readily admits, "it was funny then too."

Whether it’s the band’s pervasive humor that’s attracted fans or the catchy tunes and upbeat melodies, blink-182 has certainly grown from its early roots in San Diego. With the band’s breakout album Enema Of The State followed by other clever album titles such as Take Off Your Pants And Jacket, blink made their musical mark with lyrics seemingly written from the lips of a teenage boy basking in his sexual peak, yet one that could still appreciate a good fart joke.

Though Hoppus has no worries that fellow bandmates, singer and guitarist Tom DeLonge and drummer Travis Barker, will ever lose their sense of humor, blink-182’s most recent self-titled album release does explore a greater depth of emotion beyond just the charming sexual puns.

With many of the songs expressing feelings of insecurity, fear of loss and loneliness, such as "I Miss You" and their most recent single "Down," blink still maintains the lustful, bedroom-inspired rhymes in songs such as "Feeling This." After listening to the song lyrics compiled for the new album, blink decided on a creative twist — to position the songs in a way that created a story, or as Barker puts it, "kinda like a mini-movie."

"We just wrote the songs and, at the end, put them in an order that we thought gave each song the most impact and allowed for segues between songs," elaborates Hoppus. "We wanted it to be, rather than a collection of individual songs, we wanted it to be a complete experience. A dynamic experience, where the songs float into one another."

Another experience Hoppus is eager to talk about is the band’s recent trip to Iraq to perform for the American troops, which included Tom DeLonge’s brother, Navy Lt. Shon Kitchen.

"The thing that sticks out most in my mind was when we were in Kuwait, the wind was blowing and it was 120 degrees outside," recalls Hoppus. "You’d go outside to use the Port-O-Potty and the wind is blowing, trying to tip over the Port-O-Potty while you’re sitting there. There’s sand on the toilet paper and there’s sand in your teeth.

"We came back to our hotel that night and it was like we had done somersaults down sand dunes," Hoppus continues. "[We had] sand in our hair, sand in our ears, sand in our short’s pockets, sand everywhere. We were only there for seven hours and we were talking with men and women that have been there every single day for the past nine months. [It showed] just how grueling the conditions are out there."

And the show itself? "We played in an aircraft hangar," says Hoppus. "We were looking across the hangar at the other end where they had F-18 Fighters parked. The men and women were standing, leaned up against the tail fins, watching the show. It was a really cool experience to be playing inside this gigantic, floating city."

Another of blink’s more charitable contributions includes picking up a hammer and nails for Habitat For Humanity and building homes for those in need. So when exactly did the boys of blink grow up? "I have a one-year-old," says Hoppus. "My favorite thing we do is watch ‘SpongeBob SquarePants.’" Well, maybe growing up can wait ’til later.

Blink-182’s self-titled album is currently available. Blink-182 will be playing with No Doubt at the Hyundai Pavilion of Glen Helen on June 26. For more information, visit blink182.com.