The Sounds: Living For Their Music 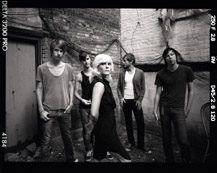 Having lived in the shadows of many bands since the release of their previous album, 2003’s Living in America, the members of the Sounds are no strangers to preconceptions and stigmatization. With their latest album, Dying to Say This to You, however, the Swedish indie-dance-pop-rockers are out to make some noise that is all their own.

Garnering comparisons to every easily connectable band, whether it’s Blondie for frontwoman Maja Ivarsson’s resemblance to Debbie Harry or the Hives for their shared native country, there are surprisingly few bands that could be considered close to the Sounds stylistically. Luckily, keyboardist Jesper Anderberg is confident Dying to Say This to You is about to change all that for the better.

“Even though it’s a little annoying in the beginning, it’s hard for people to figure out how to categorize bands without comparing them to others that sound similar. But we’re not going to be compared as much anymore.” Granted, Anderberg does admit, “Of course, Maja is blonde and we play with a little bit of an ‘80s vibe … but none of us actually listen to Blondie except Maja, which is weird.”

So what exactly will keep the Sounds away from misleading associations? “Maja’s got a unique voice and we’ve got a unique vibe when we play together,” says Anderberg. “We used sounds that we used on the last record, and the more you use a sound, the more it’s going to grow to be your own.”

So if taking full ownership of its sound and its style has become top priority for the band, how then will this album set itself apart from Living in America? Simply enough, “The songs are more mature,” says Anderberg. “All these experiences we’ve had over the last few years were written down on this record. It’s easy listening, but there’s more of a depth in them.”

“Maybe it’s an album that will last longer,” he adds speculatively.

Anderberg credits touring with a plethora of diverse bands as sources of inspiration for him and his band, most notably the punk rock summer camp they toured on as a headliner in 2004.

“When we did Warped Tour, we got a lot of inspiration from that. The whole vibe of going out to the Warped Tour is something special. The bonds you make with every band there and how you experience things 24 hours a day, seven days a week.”

While the musical influences may or may not be readily apparent on first listen to any of the band’s songs, the Sounds have always embodied the do it yourself ethic and attitude the tour stands for. The band is aware, however, of the potential for overdoing its attitude.

“Attitude is something that you have to be careful with how you express. ‘Attitude’ is kind of a negative word for a lot of people, but if you go to a concert, you want to see people that are confident,” says Anderberg.

“We love what we’re doing. We’re not cocky, we’re actually nice people. Attitude is something we put out on stage because we’re really confident in what we do.”

When it comes to performing, the Sounds do aim to please and are very aware of the effect their music can have on people.

“What we try to do with the live show is make people forget about everything around them and all the problems they have for an hour,” says Anderberg of the band’s very danceable live show.

“Some live shows can be pretty boring, why not share an hour together and have a good time?”

Dying to Say This to You is currently available. The Sounds will perform March 22 at the Henry Fonda Theatre, in Hollywood and March 23 at the Glasshouse, in Pomona. For more information, visit www.the-sounds.com.