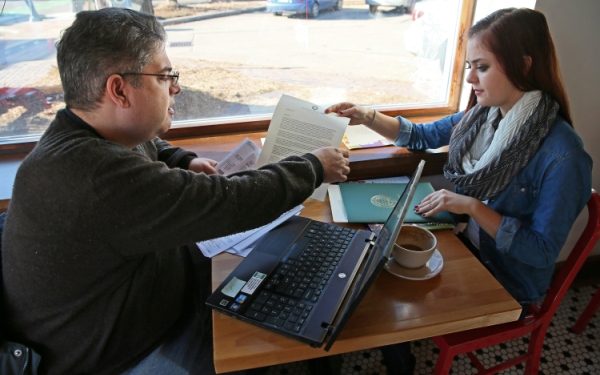 MILWAUKEE — For the past three years, Teresa Piraino has diligently filled out the federal application for financial aid for her son Anthony, who is studying criminal justice at the University of Wisconsin-Milwaukee.

In the next few weeks, the Pirainos will scramble to fill out the Free Application for Federal Student Aid again — this time for two kids, as daughter Jessica plans to study nursing at Alverno College in the fall.

“I want to get right on it,” Teresa Piraino said of the online form known as FAFSA, which becomes accessible every Jan. 1. “The stakes are high and I want to get the most we can because I can’t give them the money they’ll need.”

With the cost of college escalating — and with it, student debt — no one wants to leave money on the table.

A low-income student potentially could leave more than $6,000 on the table in first-come, first-served money that doesn’t have to be paid back or that can be repaid at a lower interest rate than other available loans, according to financial aid officials at several Wisconsin universities.

Students who don’t file FAFSA at all could also miss out on Federal Pell Grants — scholarships of up to $5,645 that they do not have to pay back.

About 2 million students who would have qualified for a Pell grant missed out a few years ago — the most recent data available — because they didn’t file FAFSA, according to data from the 2011-’12 National Postsecondary Student Aid Study.

Of those students, 1.3 million would have qualified for a full Pell grant valued at $5,730 for the 2014-’15 academic year, according to Mark Kantrowitz, senior vice president at Edvisors Network and author of “Filing the FAFSA.”

FAFSA also is required for middle-class families who may qualify for scholarships or school-based financial aid at colleges that don’t use their own supplemental aid forms.

FAFSA, which must be filed every year financial aid is requested, requires copies of income taxes and asks for information such as the student’s Social Security number, family income, family size and the number of family members attending college.

Many don’t file the 10-page, 108-question online form early enough — or at all — because they find it intimidating, they’re procrastinators or they assume they earn too much money to qualify for financial aid, according to financial aid directors.

Two key federal lawmakers charged with overseeing the reauthorization of the Higher Education Act in the U.S. Senate last summer proposed simplifying the federal student aid system, including reducing FAFSA to a form the size of a postcard that would ask only about family size and household income from two years ago.

“That’s going overboard,” said David Ehlinger, an accountant who lives in Evansville and has twin daughters in Wisconsin public colleges. “There are other questions that need to be answered,” he said, “such as whether it’s earned or unearned income, and do you pay child support, which is not on tax returns but is taken into consideration by FAFSA.”

For those eager to tackle FAFSA, the form can be filed with estimated 2014 income tax information.

Some schools, including UW-Madison, prefer families wait until after they have filed their tax returns so they don’t have to revise the FAFSA numbers later.

Those not eager to pay the government money owed in income taxes can still fill out tax returns early to complete FAFSA. They have until April 15 to pay any tax money owed.

UWM, which awards aid to about 80 percent of its 30,000 students, is among the schools that award on a first-come, first-served basis.

This year, UWM is trying something new to get more students to file FAFSA by March 1. A campus call center set up for admissions representatives to reach out to students who have been admitted will also encourage FAFSA filing.

UWM awarded $2.6 million in Perkins loans to about 1,800 undergrad and graduate students for the current academic year. The maximum award is $2,000 a year, Levine said.

“We could probably give out double that number, in terms of who qualifies,” Levine said.

“There are a lot of students who are eligible for all three — Perkins, work study and Wisconsin Grant,” Levine said.

Lawrence University contacts families who haven’t filed FAFSA by a certain date to make sure they don’t miss out on aid, said Ken Anselment, dean of admissions and financial aid.

In September, the university announced that it had received an anonymous $25 million matching gift to establish an endowed scholarship to help meet its goal of providing 100 percent of the unmet financial needs of future Lawrence students. It’s the largest gift in the university’s history.

The Zaffiros of Milwaukee aren’t leaving anything to chance in their college search or the quest for the best financial aid.

They planned to tackle FAFSA right after the first of the year to be among the first in line for whatever financial aid Emily Zaffiro, a senior at Pius XI High School, qualifies for at the college she chooses to attend.

“It’s going to play a role in her decision about where she’s going to college,” said Emily’s dad, Jim Zaffiro. “I don’t want her to have a huge amount of debt.”

About 60 percent of UW-Madison’s students receive some type of financial aid, according to Susan Fischer, the school’s financial aid director.

Fischer said one way to reduce the pressure for financial aid dependence is to discuss family finances long before a student applies to colleges.

Universities have net price calculators on their websites to offer an estimate of financial aid families can expect.

“Parents need to talk to their high school kids early to be realistic about what they can afford,” Fischer said.

For tips on filling out the college aid application, go to the U.S. Department of Education blog, called Homeroom, at: ed.gov/blog/